My Plan to End America’s Reliance on Chinese Manufactured Pharmaceuticals 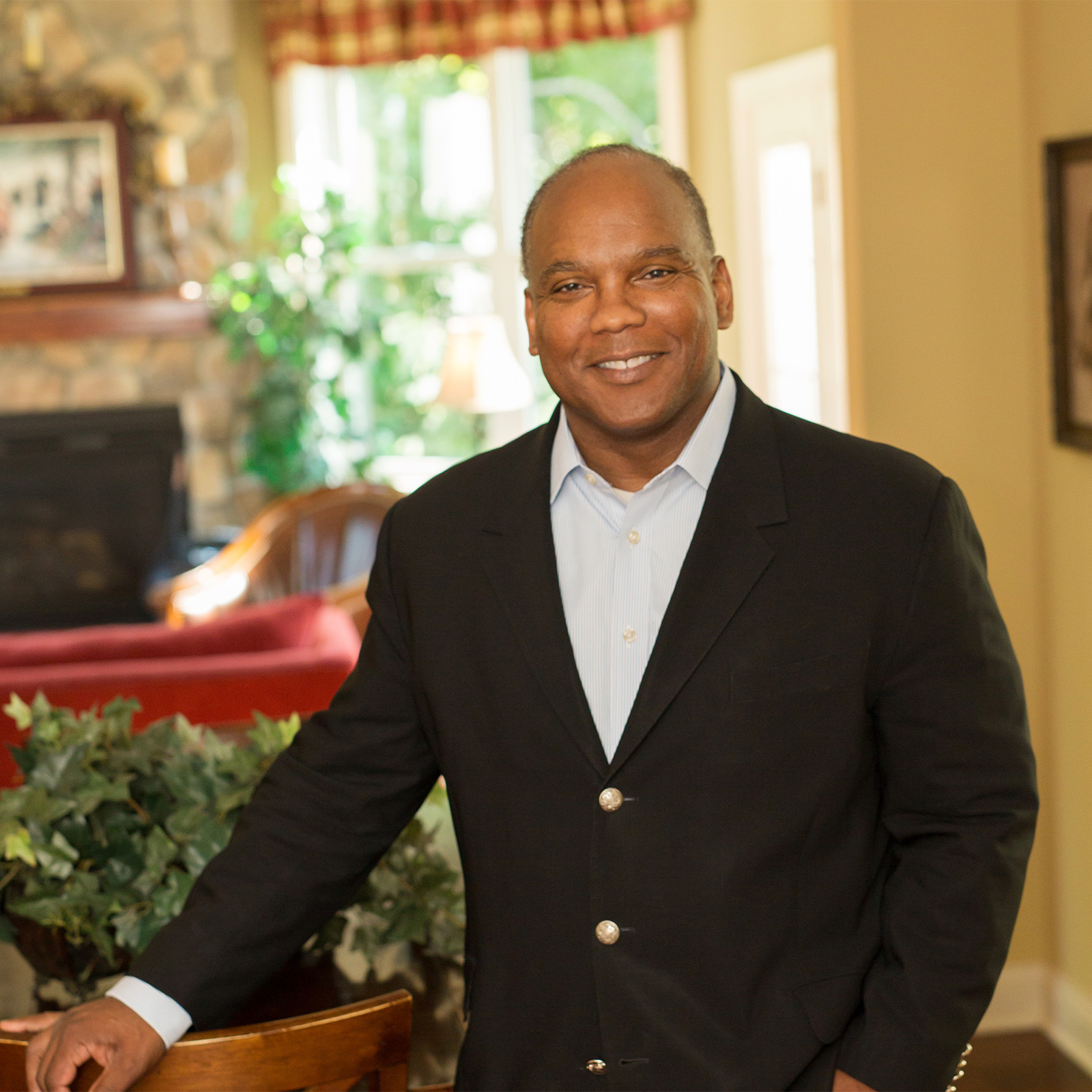 specifically highlighted the extent of our reliance on Chinese manufactured pharmaceuticals and the immediate need for realigning our supply chain in this life-saving industry.

China Controls America’s Pharmaceutical Supply
Generics account for roughly 90% of U.S. prescriptions and we depend on China for 80% of the key ingredients to make our generics. Chinese firms also dominate production of household over-the-counter drugs and life-saving antibiotics, including 97% of antibiotics and 95% of ibuprofen imports. 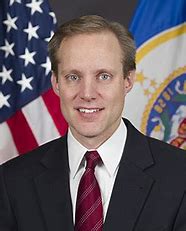 This is part of a nation-wide effort to expand mail-in voting, which as the linked article points out is far more open to potential fraud.

And now Simon has proposed rules that circumvent mail-in ballot oversight as required by law.

“Unbeknownst to almost everyone, the ballot boards that are responsible for determining which absentee ballots are properly submitted to be counted are being stacked with partisan bureaucrats instead of the citizen judges of balanced political affiliation required by law,” says the Minnesota Voters Alliance (MVA).

MVA has filed a lawsuit directly with the Minnesota Court of Appeals, and seeks declaratory judgment in the case, meaning it is asking the court to immediately force Simon to stop his actions as a matter of law.

Gov. Walz extended his order requiring most Minnesotans to stay at home to May 4th. In response to questions about the information on which the governor is relying, the Minnesota Department of Health released the modeling and the assumptions on April 10.

According to the Star Tribune , Minnesota researchers modeled two scenarios. One extended the statewide stay-at-home order until May 8, and a second kept restrictions in place only for people 60 and older and others at greater risk of severe cases until July 10.

An increasing number of Republican legislators are pushing back. Pointing out that the situation in Minnesota is nowhere near what New York City is facing, Republican Senate Majority Leader Paul Gazelka and Sen. Scott Jensen (R, Chaska) question the assumptions that are going into the models. Watch Senator Jenson's video remarks from March 27, prior to last week's release.

After the April 10 release of the model, Alpha News also featured a critical analysis of several assumptions,  by Kevin Roche. 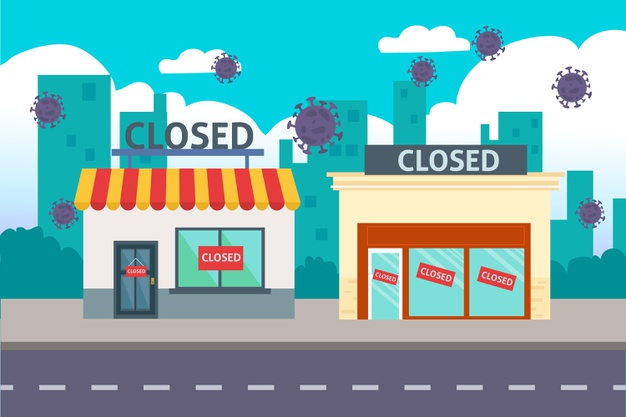 “It is past time to allow reopening of businesses that are clearly Covid-safe, “ tweeted Sen. Jim Abeler (R, Anoka). “Many should have never been closed in the first place. Tragically some of those are gone for good.”

Republicans in the Senate are questioning why large stores are deemed “essential” and remain open, while smaller local companies must stay closed. Sen. Andrew Mathews (R, Princeton) feels that the “blanket order does not fit our largely rural state.” If a local store works with its employees to operate safely, they should be able to operate. “If we wait for the state to micromanage each industry, many businesses will run out of time.”

While the Governor has not released his exact criteria for relaxing the self-quarantine restrictions, what might they include?

A Time for Remembrance and Reflection

By Barb and Randy Sutter 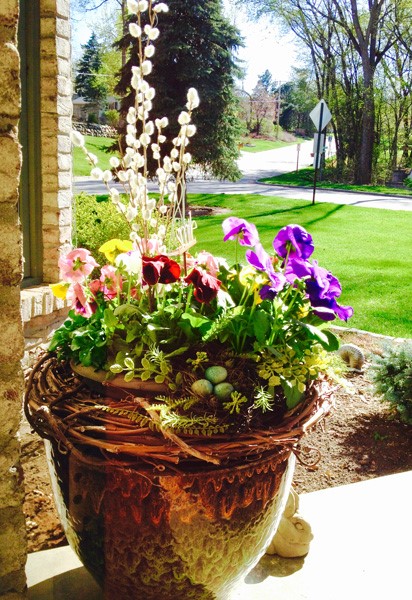 In the recent past, it has been a challenge to fully take up the traditions of this time of year, of Passover and Easter. It has been hard to step outside of our lives, so full of worldly distractions and self-gratification, and truly focus on remembrance, on reflection, and on gratitude to a power greater than ourselves.

Perhaps more than ever, this is the time for remembrance of the hardships that our forebears encountered. This is the time to reflect on the freedoms that we take for granted, on the personal responsibilities that we ignore while insisting on our rights.

Now is the time to pray to our God for his mercy, that He will give us the strength to stay the course and to help us meet the challenges that we are facing.
Those that are continuing to work at critical jobs deserve our sincere thanks. May we all commit to reflect in our conduct and in our action a caring attitude toward our neighbors.

Let us look forward to greeting each other warmly when we all emerge from this sad chapter, hopefully having learned something positive that we can incorporate in our lives as we get back on track.

Using the Pandemic for Political Advantage

I try hard not to be overtly political even though that's been a challenge lately. The Left makes it so hard for me. For example, the presumptive Democrat nominee for President of the United States, Joe Biden, ripped President Trump in January of this year for halting travel to and from China, calling Trump a xenophobe. AKA Trump is a racist. That move alone by President Trump may have saved hundreds of thousands of American lives. Trump will never get the credit. 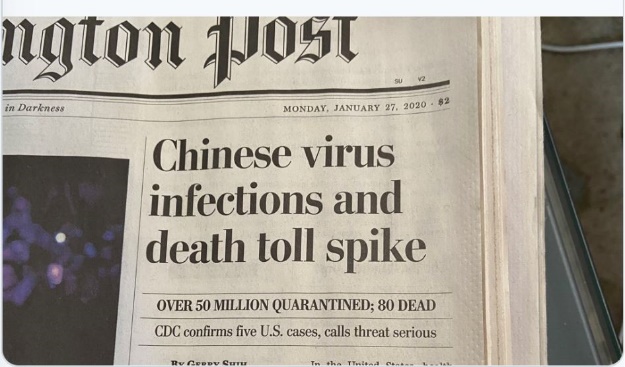 Recently the media has attacked Trump for using the term “Chinese Virus”. Now I don't really care if you agree or disagree with the World Health Organizations decision in 2015 to name diseases with descriptive terms and move away from attaching locations in the names. I am referring to the blatant hypocrisy of the media for calling Trump out when they too have egg on their face. Take a look at the photo on the left from the front page of the Washington Post from Monday, January 27, 2020 where the top headline is about ..... wait for it..... the Chinese Virus.

A friend of mine, Daniel Greenfield, recently penned a great piece titled "The Media is a Public Health Crisis" meaning the media always does its best to make a crisis worse.

I think he hits it out of the park with the last line of the article:

"Local governments have shut down bars and eateries. Nobody has shut down the media. But an hour of CNN is far more of a public health threat than all the bars in all the cities of the country." 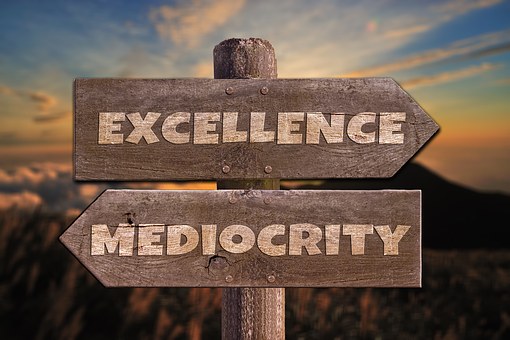 The November 2019 School Board Meeting passed a proposal to add 7 classes to give Edina students in Middle and High School a choice of Honors classes where there was none. The current school board will be voting to take that choice away at the 2/10/20 meeting at 7:00 pm. There is a chance to change this decision if everyone lets the board know you want to keep educational choice.

What you can do:

Email the school board  to let them know you support choice in the schools next year. The current board doesn’t believe that parents and kids care about enhanced educational choices. I ask you let them know you do care. Your one email will reach every school board member. Tell them not to rescind Policy 601 which added choice.
You can also attend the meeting where they will vote. It is at the Edina Community Center, room 349, on Monday 2/10/20 at 7 pm. You can address the school board at this meeting

Background
For years,Parents have been complaining that 9th and 10th grade English was not challenging enough. One of the required 10th grade books is a graphic novel (comic book) at a 3rd grade reading level. About 10 years ago there was an enhanced English choice for students. In an effort to promote racial equity and test scores, that choice was eliminated and everyone had to take the same class.

This did not work. State test scores have declined. Students are not making the progress academically that they should be. It is time to go back to what worked. 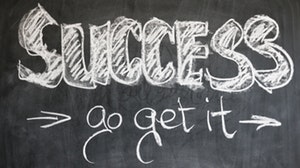 It is the responsibility of the school board to set the direction for our schools.  They have been developing a strategic plan over the last two years and gotten input from all sectors of the Edina community.  The overall goal says “the mission of the Edina Public Schools, working in partnership with the family and the community, is to educate each individual to reach their full potential.”

On November 19, 2019 the Edina School Board voted (4-3) to add Honors classes to the High School and Middle Schools.  These steps will add options for our kids to take enriched classes throughout their academic career.

Over the last 2 years, 322 students, who were Edina residents, have left Edina schools for other schools.  Each departure cost the Edina schools about $8,500 per student.  That is over $2,700,000.  While losses are reduced by allowing students from other school districts to enroll in Edina, that is still a big fiscal hit for the school district.  The major reason students departed Edina was for rigorous academics.  This policy hopes to keep more resident students staying home

I commend the school board for getting the best information available and making this decision.

In the High School, this policy adds honors classes in 9th and 10th grade English which do not exist currently.  Edina is the only school out of 37 comparable metro schools without an enriched option.

A Prescription for a Winning Republican 2020 platform 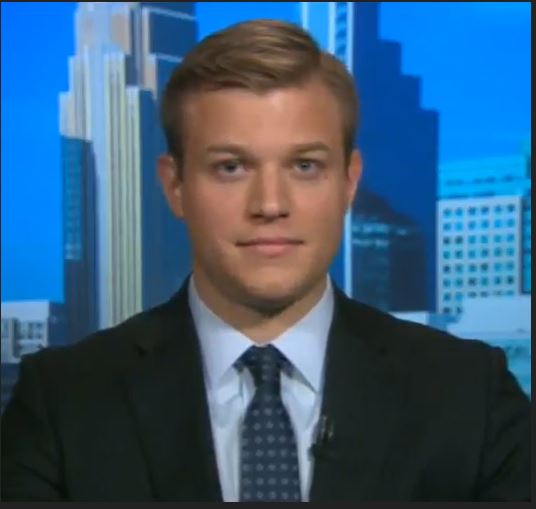 We need to make clear that we stand for strong families and a financially sound middle class.

We need to promote middle class and working class wage growth and real return on savings.  This means ending policies that redistribute wealth to the rich, that encourage inflation or drive down interest rates.  We should stand for

We need a new antitrust push.  Pro competition, not anti-business. Too little of the American economy is subject to healthy competition.

We need to stand behind “Made in America” and the hiring of U.S. workers.

Avoiding Future Conflicts of Interest at the Edina School Board 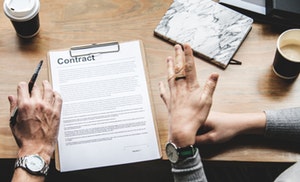 The role of the Edina School Board is to represent the interests of the citizens of Edina and the school children in the Edina Public Schools. The board is also to make sure Edina meets the standards set by the Minnesota Department of Education. It is not to represent the teachers union, or the administration.

The Edina Teachers Union recently endorsed 3 candidates for the school board because they are “Union Friendly”. At the last election they spent thousands of dollars mailing postcards supporting their endorsed candidates. From their point of view this makes perfect sense. After all, the Edina School Board votes on contracts with the union.

There has been a budget shortfall every year in the recent past. The board is faced with decisions on what programs or services to cut. There is a conflict of interest between what the Teachers Union desires and the needs of the students of Edina.

To avoid that conflict of interest, I ask that all union-endorsed school board candidates pledge to abstain from voting on Teachers Union contracts. 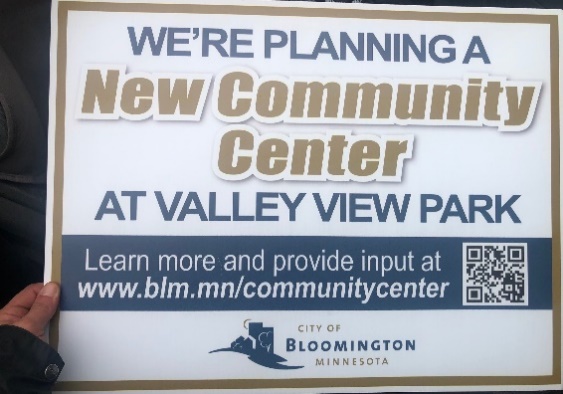 Mayor and city council candidates need to be evaluated based on how they would govern. We support candidates that have been willing to be open and truly listen to the residents of the city. We have grown increasingly concerned with the degree to which decisions in Bloomington have been made behind closed doors.

Bloomington’s City Council has approved initiatives that increase the role of government and increase city expenditures, like organized trash collection and (it appears) mega-sized community centers. They have rejected legitimate requests of citizen groups that these decisions be put to referendums. Even when the city council chartered a citizen panel to advise them on the Hyland Greens golf course, they picked probably the least favored recommendation and moved to sell off some of the land for development.

In Bloomington, it is time for a new approach to governing the city. It is time for a change in the make-up of the City Council.
We recommend Ryan Kulka (Mayor), Brian Clemens (At-Large), Al Noard (District 1) and Susan Woodruff (District 2).