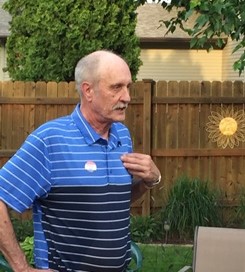 At a kick-off fundraiser June 3, King emphasized his “local common-sense” views on the role of government and many current Bloomington issues.

Mr. King noted that in the past 10 years the city’s budget has almost DOUBLED.  Yet, the number of roads and parks is the same and several key city services have been reduced as the population has remained the same.

Paul supports Bloomington’s annual city-wide trash pickup, Curbside Cleanup.  Bloomington Residents who attended the June 3rd fundraiser noted that items placed curbside are actually picked up by other community members from the area before trash haulers collect what remains.  It is a highly-effective, convenient, recycling/redistribution program.

He opposes the proposed $85 million community center, especially at Valley View Park.  Most of the features included in recent designs are sports-facility services that duplicate those offered in the (open to the public) Activity Centers at Bloomington Kennedy and Jefferson.

Mr. King is against rezoning residential R1 (low-density) housing areas to R3 (medium-density).  He discussed the Met-Council’s goals for Bloomington to add 5000 low-income housing units, and the builder-incentives for those that Bloomington has in place.  The incentives include waiving requirements for parking-lot landscaping, reduced number of off-street parking places, and smaller on-site storage areas per unit.

He agrees with comments he’s heard from many city residents that closure of the DMV office was not a good decision by the current Council.  There may be a behind-the-scenes desire to redevelop the site for other (commercial) use.  The city failed to market license/title services to the many auto dealerships within Bloomington and Richfield, which could have increased revenue. He’d support opening a city DMV office in a retail mall location, such as MOA or a conveniently-located strip mall.