Attorney Doug Seaton gives us a timeline of the formal steps taken by Personal Care Assistants in the article below, noting that 7,690 election authorization cards have been filed by PCA's in support of the decertification vote.  And a formal appeal of Bureau of Mediation Services decisions was filed May 19 with the Minnesota Court of Appeals.

Reporter Kevin Mooney has been following the story and documented further details and the negative side effects the PCA unionization has on real people's lives.  You may read his reports from March (CLICK HERE) and May (CLICK HERE). 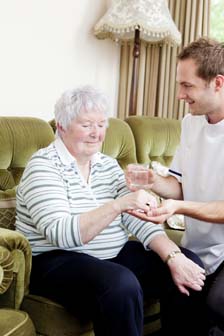 The Minnesota PCAs’ Case in the Courts

On May 24, 2013, Governor Mark Dayton (DFL) signed    S.F. 778 into law, dramatically changing the lives of home healthcare workers. The law declared that these caretakers were government employees, but only for collective bargaining purposes.

It was an unusual act because these personal care assistants (PCAs) are typically individuals who take care of their family members with disabilities. These PCAs are not traditional government workers in an agency.

Further, the PCAs could not receive the benefits that most government workers receive. All these assistants got was the ability of a union to claim to represent them.

In May 2015, the union signed a contract with the state which authorized dues deduction for PCAs of 3 percent of the Medicaid money these PCAs receive for the care of their loved one and a proposed new contract for 2017-2019 continues this procedure.

However, Doug Seaton, Senior Counsel for Seaton, Peters and Revnew, decided to fight for the liberty of these caretakers. On August 18, 2014, Seaton filed a complaint on behalf of Kristina Greene and other PCAs in the United States District Court for the District of Minnesota. The caretakers argued that the Minnesota law violated the U.S. and state Constitutions because personal care assistants are exempt from collective bargaining under the National Labor Relations Act (NLRA) and state law. Unfortunately, the Court dismissed the complaint on January 26, 2015, ruling there was nothing the Court could do to fix this problem.

On February 24, 2015, the caretakers appealed to the United States Court of Appeals for the Eighth Circuit. However, on December 3, 2015, the Court issued a decision affirming the lower court’s ruling. The court said that even though Congress exempted these PCAs from the NLRA, they are not exempt from all regulations. In addition, as for the state law claims, this state law controls here, rather than the older one the caretakers mentioned. The U.S. Supreme Court declined to look at the case in the aftermath of Justice Scalia’s death.

Stymied in the courts, the caretakers chose an alternative action: decertification. However, the Minnesota government was unwilling to provide the PCAs with the information the PCAs needed and the government was required to give.

On October 20, 2016, Greene and other PCAs sued the Commissioner of the Bureau of Mediation Services and other state agencies in Minnesota District Court (Second Judicial District) in Ramsey County. This time, the PCAs were suing because the government agency had not produced an accurate list of personal care assistants, and the caretakers needed the list to pursue their decertification effort.

After issuing two earlier orders, on November 18, 2016, District Court Judge Awsumb issued a Supplemental Disclosure Order, clarifying his order that the Department of Human Services provide a current list of PCAs to the plaintiffs. The government agencies appealed the order to give the lists on November 22, 2016, but the Minnesota Court of Appeals on November 29, 2016, denied the government agencies’ request to temporarily stop the order. The case and the agencies’ appeal of the orders are both ongoing.

Meanwhile, on December 2, 2016, the PCAs filed their decertification election petition with the Bureau of Mediation Services (BMS). To date, they have filed 7,690 election authorization cards with the BMS in support of the petition. They have also submitted evidence of possible fraud in the original 2014 election and sought an investigation of the original support documents submitted by the SEIU to obtain that election. The BMS on February 10, 2017, dismissed the petition and has also refused to investigate the fraud allegations. These BMS decisions were appealed to the Minnesota Court of Appeals by MNPCA on May 19, 2017. In addition, the Minnesota Legislature’s Subcommittee on Employee relations, which has jurisdiction over the proposed new 2017-2019 SEIU/PCA contract, is looking into the BMS refusals to schedule the decertification election or investigate the fraud.