Proposed: A Limit on Miles For Metro Drivers 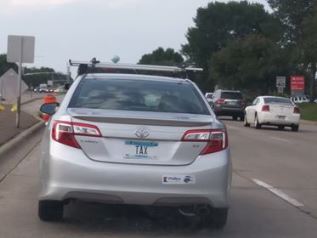 If you enjoy the freedom of the open road, enjoy it while you can.

Frank Hornstein (DFL, Minneapolis), the chairman of the MN House Transportation Finance and Policy Committee, is the lead author of the Sustainable Transportation Act. It puts into statute a new statewide goal to reduce vehicle miles driven by at least 20% by 2050.

In an information hearing in March, Hornstein told the committee that electric vehicles alone won’t meet the goals set for cutting greenhouse gases. While transportation is the largest source of emissions, electric vehicles are still less than 1% of new vehicle sales.

Move Minnesota, a transit advocacy group in Minnesota, supports the concrete emission reduction standards pushed by states like California and Washington. Sam Rockwell, executive director of Move Minnesota, holds that the shift to electric vehicles is not happening fast enough to meet climate change timelines that they want mandated. Rockwell is quoted in the Star Tribune as saying, “Reducing vehicle miles traveled in Minnesota is essential.” He suggested setting interim benchmarks for the target to keep the state on track and adding mechanisms to ensure the reductions can be enforced.

And since it is not practical for people living in rural areas to significantly reduce their driving, the focus will be on urban residents. They will need to reduce their driving by more than 20%. In Rockwell’s opinion, to make the urban reductions work, everyone needs to live and work within a half-mile of reliable transit.

Aspects of the Sustainable Transportation Act seem inspired by the climate change-fighting policies of the Green New Deal. While the Biden administration has appeared to distance itself from that controversial resolution sponsored by Rep. Alexandria Ocasio-Cortez (D, N.Y.), it is already looking to adopt related policies.

Are bills such as the one authored by Rep. Holstein simply meant to reduce automobile emissions? Marc Morano, author of the book “Green Fraud: Why the Green New Deal is Even Worse than You Think”, writes that these policies are part of a broader thrust to push the economy off its free market foundations and control “every aspect of your life.”

As quoted in the Epoch Times, Morano has said, “This is the idea … that the earth can’t be left with capitalism. Therefore, you need a host of centrally-planned bureaucrats empowered not just in environmental and climate decisions, but in every aspect of your life, to the size of your home to what appliances you use, to what cars you drive.”

The Sustainable Transportation Act will likely be incorporated into a House transportation omnibus bill. It is expected to face opposition in the Republican-controlled Senate.