Proud that the CD3 Executive Committee Took a Stand

The newsletter this week contains several articles on the recent resignation of the MNGOP Chairwoman, the events surrounding that move, and the events leading up to it.  Noteworthy was the statement released by the Congressional District 3 Executive Committee on August 17, 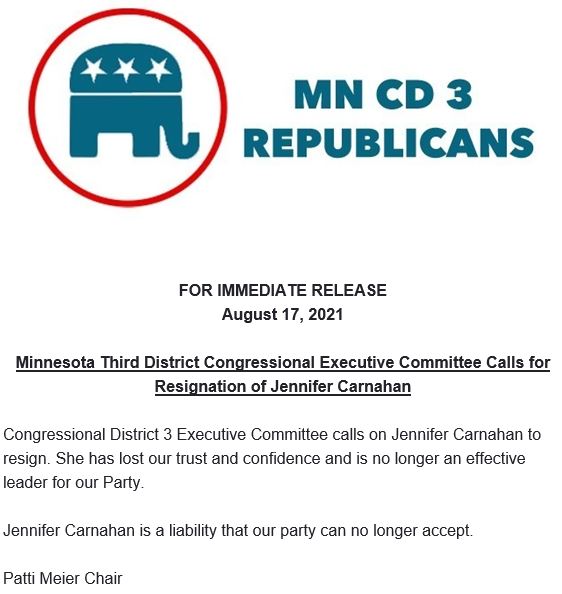 This statement was debated within the CD3 Executive Committee during a special meeting on the evening meeting August 16.  The approval of this statement was virtually unanimous, with no dissenting votes, so strong was the feeling within this elected group.

The Executive Committee members knew that the feeling across CD3 was not nearly as unanimous.  Yet almost all of the members had had personal experiences with Jennifer Carnahan or had heard first hand of her actions and of how she had dealt with people that did not support or agree with her.  Allow me to relate a story.

Jim Lund is the Co-Chair of Senate District 50 in Bloomington/Richfield, which spans CD3 and CD5.  Jim supported Mark Koran in the April election for Chair, and Carnahan knew it.  After Carnahan won, she asked the eight CD chairs to nominate two activists to an Election Integrity committee.  One activist that Patti Meier nominated was Jim Lund.

Jennifer Carnahan refused that nomination.  When Patti asked why, Carnahan replied, “Because he is a racist.”

Jake Moroshek, at the time the Deputy Chair of CD5, knew and had worked with Jim Lund.  He knew that Jim was not a racist and was amazed that anyone, much less the Chair of the party, would say that.  When he next had the opportunity to have coffee with Carnahan, he asked her if indeed she had reason to say he was a racist.

In her reply, she told Jake that Jim had been at a private party for her opponent, Mark Koran.  During that party, attendees had shouted, “String her up! string her up!”

This surprised Jake.  It was a lie.  Jake had been at that party.

Among the CD3 Executive Committee members, it was known that Jennifer had no hesitation to make false accusations to overcome opposition.  When National Committeeman Max Rymer identified the lax financial oversight at MN GOP headquarters that led to the overpayment of fees to a national fundraising firm used by the Republican Party, Carnahan went to the Chair of the Republican National Committee to accuse Max of undermining Republican national fundraising efforts.

Shortly after the CD3 statement was released, a Carnahan loyalist in southeastern Minnesota posted on Facebook: “Ask Barb Sutter how often she was in Florida working on this coup with Rick Rice.”   Barb Sutter flew to Florida with a friend to help her look for a new house.  Rick Rice lives in the area, and he has expressed his opinion on social media based on his own personal experiences with Carnahan.  But there were no efforts to plot a coup.  Of course, one can only speculate where this out-state Carnahan loyalist got that false idea.

There are some within our own Congressional District that have attacked Patti Meier and Barb Sutter for expressing their opposition to Jennifer Carnahan.  One retired military officer has gone so far as to write

“This coup attempt is disgraceful and I am deeply dismayed you are a part of it.  Accordingly, I will bring this issue up at our next Senate District Executive Committee meeting and call for a vote from our committee to demand your own resignation.  The cabal you are a part of is destroying our party … not helping it.  You are playing right into the hands of the DFL and the press.   It is selfish, vindictive, misguided and shameful.”

This fealty to a party chair that functioned more like a Supreme Leader is very disappointing in one whose military branch prided itself in the character and selflessness of its senior officers.  Even Gen Patton was disciplined for slapping a corporal during World War II.  Yet Sutter and Meier are “selfish and misguided” for calling out an MN GOP chair that callously would seek to ruin reputations, “ruled by grudges, retaliation, and intimidation”, publicly disparaged individuals on her staff that did not sufficiently praise her, and did not follow-up on multiple allegations of sexual misconduct?

The leaders in our party like Barb Sutter and Patti Meier deserve our praise.  It is uncritical, uninquisitive people like the letter writer that should seriously consider resigning.

Dear Reader, I urge you to read the follow-on articles about the events leading up to former Chair Carnahan’s resignation for a more in-depth coverage of the events between August 12 and August 19.