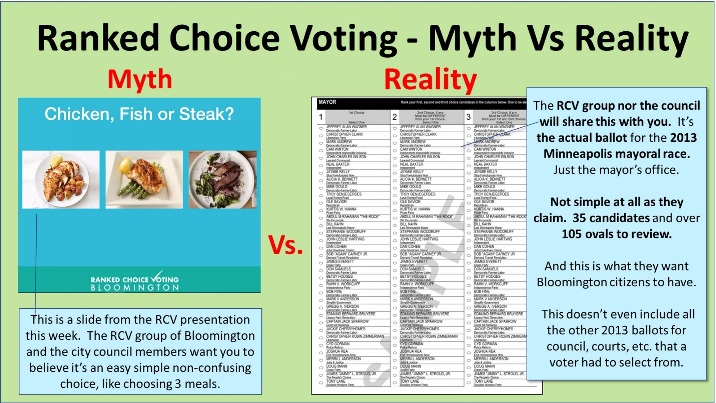 Normally the Bloomington Charter Commission meets annually for business in the month of May. During this time of COVID shut down, civil unrest, and a difficult forum for public participation, the Charter Commission has met a total of three times (so far) this year: May 7, June 11 and July 9th.

The first meeting held May 7th, dealt with the court-mandated organized garbage referendum and its confusing language for presentation on the November ballot. There will be more on this another time. The latter two meetings were specifically to address the City Council ordinance regarding Ranked Choice Voting (RCV). It appears that the City Council, without articulating a compelling reason, deems a drastic change in the way we have voted for years is necessary and urgent enough to be on the ballot this year.

The second Charter Commission meeting, which was public via teleconference, was held June 11th and was summarized in our June 22 article. While the motion to accept the ordinance FAILED due to a tie, much confusion about the Commission’s action ensued.

Last newsletter we notified you of a new Special Charter Commission Meeting called for July 9th and you responded with letters, emails and voicemails to Commissioners. I was told the city secretary was overwhelmed and I believe it made a difference.

Here’s what happened at the July 9th meeting, (a video recording of that meeting can be reviewed here) and what to expect next.

The chair of the commission indicated he called the July 9 meeting to discuss unfinished business from the original June 11th special meeting devoted to approving the RCV Ballot initiative. This July 9 meeting was for public listening only since the public hearing was on June 11th.

This time there were two more commissioners present and the City Attorney summarized the June 11th meeting results for their benefit, along with clarifying several irregularities that the public pointed out. She confirmed that everything that happened after the first adjournment on June 11th was null according to Robert’s Rules of Order. She also indicated that the original approval motion failed but admitted that no communication was made to that effect to the City Council. Later in the meeting, when asked why she had not communicated the failed motion, the City Attorney said it was because she was not asked to do so.

I found the next commentary by the City Attorney at the 10:58 mark very interesting and important. She laid out next steps very carefully by stating that the Charter Commission was charged with making one of any of the four following decisions.
1. To approve the ordinance to put RCV on the ballot
2. To reject the ordinance
3. To offer alternative wording
4. To ask for a 90-day extension to review
At the 11:52 mark, the City Attorney stated, “In the absence of any of these actions or asking for the additional 90 days, the City Council can continue to move forward.” This will be a key statement if the City Council tries to pass the ordinance on its own disregarding the Charter Commission’s rejection of the ballot initiative. She went on to outline the deadlines that must be met for inclusion on the ballot.

Is that the end of the story? Probably not. The City Council is now going to discuss RCV in their Study Session on July 20, 2020 at 6 PM, under item 2.3. Will they disregard the Charter Commision’s rejection of the ballot initiative and try to take their own action? There have been considerable efforts recently by FairVote and some local parties to denounce the various city meeting proceedings and procedures, and to forcefully ask that RCV be put on the ballot anyway. At this point we will have to see what happens in the study session. If the Council decides to try to put RCV on the ballot themselves, we will once again have to object based on what the City Attorney outlined in the Charter Commission meeting. Stay tuned.

Because this is a quickly-moving issue, Kathy Kranz, Co-Chair of SD50, will send out RCV-related notifications to those who request addition to that list. Email her at [email protected]