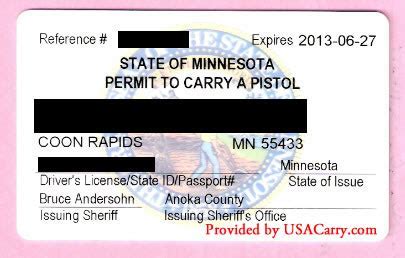 Almost 100,000 Minnesotans were issued Permits to Carry in 2020, a record since the Personal Protection Act was signed into law in 2003.

The total number of valid Permits to Carry in Minnesota is up to more than 358,000 as of March 1, 2021, according to the MN Department of Public Safety. That is more than 8% of the Minnesota population above 18 years of age  (note that eligibility for a Permit to Carry starts at age 21, so the percentage of the eligible population actually holding a carry permit is likely even higher). Nearly 1 in 10 Minnesotans 21 years or older are permitted to carry a firearm in the state. Compare that to a grand total of 79 firearm homicides in Minnesota in 2019, according to the FBI.

It is unsurprising that a record number of law-abiding citizens (particularly in Hennepin County) are taking steps to protect themselves in light of increasing violence in specific metropolitan areas over the past year, which has naturally led to a dramatic decline in police response times. Minneapolis had 82 homicides in 2020, a more than 70% increase compared to 2019, while gunshot wound victims more than doubled to 551. Robberies also increased almost 50% year-over-year per the city of Minneapolis Community Safety Update.

2021 has already seen the DFL resurrect previous failed gun control measures that will adversely affect law-abiding, responsible gun owners (HF 694 "Universal Background Checks / Registry" and SF 1431 "Red Flag Orders"). Carry permit-holders, for example, are an extremely law-abiding group (it should be obvious that criminals do not typically apply for firearm permits in-person at local law enforcement agencies), with less than 1/10th of 1 percent of all permit holders being associated with an actual crime involving a firearm.

Call to Action: Tell Senator Franzen ([email protected]), Representative Elkins ([email protected]), and DFL Senate Minority Leader Ron Latz (651-297-8065) to stop wasting time on initiatives that will only burden law-abiding citizens' ability to exercise their constitutional rights. They should focus instead on enforcing current laws and targeting actual criminals in Minneapolis if they want to productively address gun violence.