The October 25 dinner meeting room was filled as more than 60 people listened intently to Rep. Matt Dean’s vivid, clear explanation of what led to the current health insurance crisis and the Republican strategy to resolve it.

The melt-down of the individual insurance marketplace for 2017 impacts more than 250,000 Minnesotans .

Many in this group are facing:

Despite monthly premiums of $1,400 - $1,700 per couple, and yearly deductibles of $ 6,500 per person ($13,100 per couple), people out-state may need to drive 100 miles to a covered clinic.  MNSure or independently purchased individual insurance will not cover treatment at MN’s premier destination medical facility, the Mayo Clinic, in 2017. 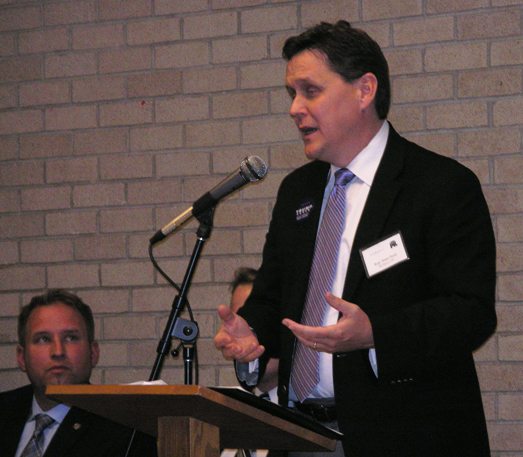 Any solution comes too late for Charlie Dunker, whose wife died in 2015.  A video documenting the MNsure failures that delayed her care can be seen at stopmnsure.org.  SD49 and SD50 Legislative candidates Rep Chad Anderson, Mike Lehmann, and Max Rymer joined Matt Dean in reporting what they have heard directly from voters with serious medical conditions who are experiencing higher costs and less access to care.

How did we get here?  Bad choices by those who implemented MNSure.

1. Implementing at all rather than filing for a waiver.  In 2008, Minnesota had effective solutions already in place for the key goals of the ACA:

2. Grouping the most-ill with other individuals for insurance.  MNSure’s implementation is at the root of the financial woes:

Even with the premium increases, insurance companies were not collecting enough to cover the medical and administrative costs.  Promised Federal funds to cushion losses were never paid.  By May 2016, ALL MN insurers chose to exit the individual marketplace for 2017, sending out cancellation notifications.  To entice a few insurers to offer any plans for individuals in 2017, MN had to agree to significant clinic network restrictions, yet more premium increases, and caps on the number of individuals a company would be required to sign-up.

3. Continued use of failed computer programs / processes.  The technology selected to support MNSure enrollment and administration was another bad choice for implementation. A few examples of continued failures of basic processes in 2016 include:

All other states that chose the same packaged computer programming have now abandoned it and either moved to use the Federal Exchange or scrapped it and started over.  After spending almost $300 million trying to fix this, it’s past time to scrap it.

The MNSure Board intentionally excluded doctors and those from the insurance industry – i.e., anyone who had an in-depth understanding of the complexities and typical pitfalls of the processes needed to provide, bill, and pay for care.

Those who agree can sign a petition on Dean’s website, stopmnsure.org.  We can also write to the Governor and our Legislators to encourage them to adopt the solutions proposed by GOP leaders.  Some of those solutions were described at an October 5 press conference as highlighted by previous SD49 reporting