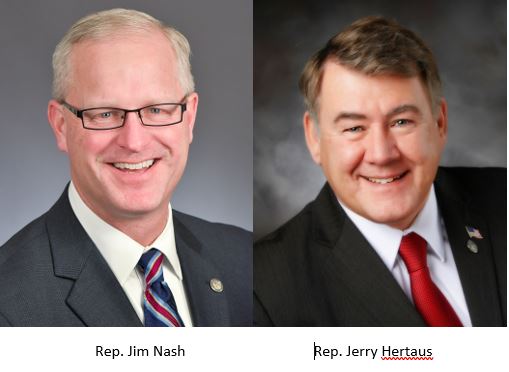 Rep Jim Nash (R, Waconia) and Rep. Jerry Hertaus (R, Greenfield) answered a number of questions during the Pints & Pent-up forum on April 14. This is a continuation of an article in our last newsletter.

On the Governor’s emergency powers: Rep. Nash -- the people do not have a voice right now. When the turkey flu struck, the legislature showed how quickly it could respond. Walz right now believes that he is the only one that can make these decisions. The legislature has been effectively muted.

On the status of taxes on the Paycheck Protection Program loans: Rep. Nash -- DFL House leaders will likely hold with taxing forgiven PPP loans as taxable until the very bitter end of session. They will then trade it away for something they want really badly. We have no idea what it is going to be.

Rep. Hertaus – our DFL colleagues have great ambitions. At the session start, the chair of the House Ways and Means Committee instructing the members that the budget in this new biennium would be reimagined with equity in mind. They brought forth a $52.4 billion budget proposal that is a 9 percent increase in spending, part of which requires an increase in revenue. They know it has no chance of passing in the senate, but they will hold out on the PPP loan taxes until the very end because they know it is so near and dear to every Republican legislator.

Jerry predicted that it will not get resolved and will result in special sessions. This has happened before, when Gov. Dayton vetoed the budget. The stalemate continued until late June and the end of the MN fiscal year. Then he realized that licenses couldn’t be renewed, including liquor store licenses, and July 4th was coming up. Dayton finally signed the very bill he refused to sign seven weeks earlier. Beer settled the budget issue then. This time, you might want to stock up.

On allowing grocery stores to carry wine and stronger beer: Rep. Nash -- I tried five years back, and people came out of the woodwork saying that I was trying to kill liquor stores.  It took about three decades to get Sunday liquor sales.  I don’t see this happening for another 10 or more years.

Rep, Hertaus -- municipal leaders were against Sunday sales because their liquor stores would be open for an extra day for no additional revenue.  In fact, the increase in revenue more than covered the labor costs.  Despite that, I agree that opposition to these changes will remain strong.

On long durations for absentee voting:  Rep. Hertaus -- voting should be a measure of the mood of the people at a particular point in time.  The candidates should appeal and debate right up to election day.  If some important information comes out late in the campaign, will many people ask for their ballots back?  We are not trying to suppress votes.  Responsibilities come with the right to vote.

Rep. Nash -- DFL priorities include having the Help America Vote Act funds bypass the legislature and go straight to the Secretary of State, so he gets millions of dollars to subvert your votes. They want to allow people to use bills with no ties to a geographical location, such as medical bills, to prove residency for voting.  Look up House File 9.  It will make you livid.  This is one of the areas where activists need to be most vigilant.

On witnessing the counting of absentee ballots:  Rep. Nash -- none of the bills that Republicans have brought forth in the house have gotten hearings.  Hopefully, the MN Senate will be taking up the issue.

Rep. Hertaus – an attorney friend in Georgia shared that they found more than 20,000 fraudulent ballots.  They were pre-printed; every circle that was filled in had the same dot alignment.  They were supposed to be mailed in but had no folds or creases. Even if the ballots made no difference, the point is that confidence in the election system has been shaken.  We need to re-establish confidence by restoring the way we conducted elections.

On the federal American Rescue Plan funding coming to Minnesota:  Rep Nash -- “Thank God for the Senate!”  The DFL leadership would like to adjourn this session and let the Governor spend the money on anything he wants. We need Sen Gazulka to really dig in on that.  The House is the “Appropriations Chamber”, but the House leadership is afraid to cross the governor, at least while he maintains his emergency powers.

Rep Hertaus -- $5.99 billion is coming to Minnesota. Large government units like Hennepin County will get direct appropriations.  Some $2.7 billion is left to the discretion of the Governor.  The DFL leadership and the chairs of the respective House finance committees are not working to set out how that money will be used.  The excuse being given is that the federal government hasn’t provided us guidance. The omnibus funding bills could allocate the funding including contingencies, but the DFL chairs prefer to run out the clock.

On legalizing cannabis: Rep Nash -- it won’t happen for quite a while.  If it came to a vote on the floor now, it would be voted down. In Colorado, where it is legal, the drug cartels have not gone away; they have just lowered their prices.  My concerns with legalized cannabis are a lack of an effective test of impairment and a lack of cogent workplace rules to deal with users.  Rep Winkler’s bill does not address these concerns.

Rep Hertaus -- the DFL is using the cannabis bill as a wedge issue to pander to.libertarian and independent voters.  It is a problem given our inability to treat mental illness and addiction in this state. As an employer, my insurance company told me who I could hire to operate equipment.  In my prime years as a contractor, about 65-70% of all applicants 20-30 years old were ineligible to be hired because of DWI convictions or other drug-related offenses.  Legal cannabis would work against efforts to move more people into responsible and better-paying jobs.

Thank you to Jim Nash and Jerry Hertaus for a great forum!