Republicans Should Stand for Cleaner and Cheaper Energy

Mike Franklin, president of the Minnesota Conservative Energy Forum spoke to an attentive group of SD49 Republicans at our March 27 dinner meeting.

He spoke passionately, advocating that Republican candidates would have a winning message if they pushed for cleaner and cheaper energy.  It would also be an economic benefit for Minnesota households & businesses.

The public utilities’ monopoly on energy production and the distribution grid can be compared with the telephone system of the 1960’s when if you wanted a telephone you leased it from the phone company, and you had no choices (other than call / don’t call) for the high long-distance calling rates.  Energy production and distribution has also been managed based on a sole-source, over-regulated, protected-pricing model.  MNCEF believes that technology has advanced to the point that it is possible to instead use a free-market model. "All of the Above" is both cost-effective and a winning message when it comes to energy sources. 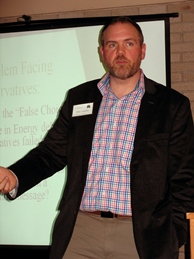 Clean energy has been a winning issue for progressives in Minnesota, because they trapped Republicans with a “false choice” of competing values (clean vs cheap, harm to the environment vs proven energy sources).  Only the government and large energy monopolies could successfully manage these choices.  Increasingly, younger Americans feel the priority should be to develop alternative energy sources, and they think that only conservative Republicans believe that the priority should go to expanding production of oil, coal, and natural gas.

Franklin argues that, as Republicans, we should

Are clean energy sources able to compete economically against oil, coal, and natural gas? While single-household solar or wind energy is still higher cost, larger private companies such as Walmart or Target are setting up, where permitted, solar-panel systems “at scale” that will provide sufficient energy for their own use and sometimes a surplus that can be added to the grid. Walmart currently has more solar panels than 3 states.

Wind energy generation is now cost-effective, even without subsidies. Subsidies are slated to end in 2019, so public and legislator education and emphasis on energy now is important; MNCEF’s position is that the subsidies should not be renewed.

Yet, if clean energy sources are now economically competitive, why are Minnesota rates higher than in the past? Guaranteed a “reasonable rate of return” over costs, the utilities have little incentive to bargain with their employees’ union. They also have little incentive to move away from coal to back-fill when the wind doesn’t blow. And the recent refurbishment of a Minnesota nuclear power plant cost twice the original estimate – no issue for the utilities because the regulators allowed the costs to be recovered through an increase in customer rates.

Contrast this with our neighboring state to the south. Iowa now produces more than 30% of their total electricity from wind/solar alternative energy sources. They have one nuclear power plant. Iowa energy rates have remained stable.

From audience questions it was clear we have a wide range of knowledge, from:
- those of us who are just happy to be able to reliably turn on lights to
- those who’ve studied alternative energy options for years and now are utilizing them to
- engineers and a few policy-makers who know the technical and financial details of energy production, legal and regulatory constraints, and pricing.