Our April dinner speaker, Preya Samsundar, experienced an action-packed first year as a professional journalist.  On her way to an undergraduate degree a year ago at University of Minnesota, expecting to soon take the LSAT exam and apply to Law Schools, she accepted an opportunity presented to her: write for a start-up online news organization, Alpha News.  She found the work so interesting she completed her double-degree in Political Science & Sociology with an added minor in Journalism.  She now writes for The Hill as well as Alpha News. 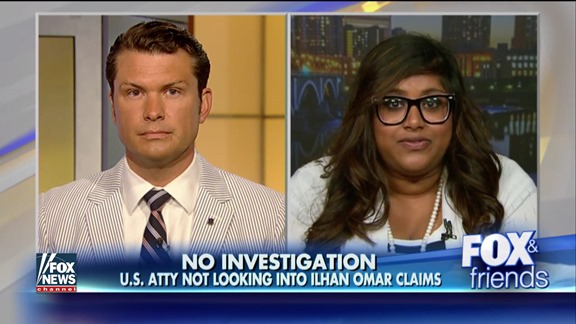 In summer of 2016, Samsundar’s editor asked her to look into a mention in the Powerline Blog that a Somali woman candidate running for the DFL endorsement against long-time Minnesota state representative Phyllis Khan (District 60B) had two husbands.  Samsundar dug deeply into the story of Ilhan Omar’s deceptions and found herself spotlighted at the national level by Fox News.  Her own background as the daughter of immigrants (her parents both came, legally, from South America) was a key factor in her reaction that something was “off” about Omar’s angry and evasive responses to questions about her family / marital status.

Starting to unravel the threads, Samsundar found the candidate had TWO marriage certificates, the first of them to her brother while she was still in college, and 3 children by her second “cultural husband”.  During the election campaign the candidate said she was “in the process of getting a divorce” but now that she’s in office she is not proceeding.  She cites costs & difficulties in gaining consent, even though MN grants divorce when petitioned by one person.  Omar’s brother/”husband” living in London, whom Samsundar interviewed during the campaign, still has access to the USA as the spouse of a US citizen.

Preya Samsundar is proud of the work Alpha News is able to do, digging deeper into issues that affect everyday life in MN as well as local political news.  Some examples:

Samsundar said she’s recently been covering protests, and likes that her appearance allows her to blend in with the primarily young and liberal groups and get unique perspectives.  After she covered the March 4 protests against the pro-Trump rally, inside the State Capitol building, her editor encouraged her to get some body armor. Her videos from that event are viewable on Alpha News, and she continues to follow the story.  Despite ample video evidence of the violence, including by the son of Tim Kaine (2016 Democrat candidate for vice president), no one has yet been charged.

Samsundar said online news sites, like Alpha News, must take extra care to be factual and build credibility.  Although with today’s video and audio recording technology and publication tools anyone can be a “journalist”, it’s hard to do the work well. Fake news does exist and quoting it taints a writer’s credibility.  She believes it’s impossible for any writer / journalist to be unbiased; the best stories are ones where a writer states a theme, provides the supporting facts and states their conclusions.

Alpha News is a service that offers free subscriptions for email updates.  CLICK HERE  to learn more about Alpha News.  Scroll down to register your name and email address.

Samsundar ended her presentation with the observation that her Mom had always said she’d be a good journalist. Preya Samsundar’s found a great career.  Her warm advice for young graduates:  “Mother knows Best” is true!