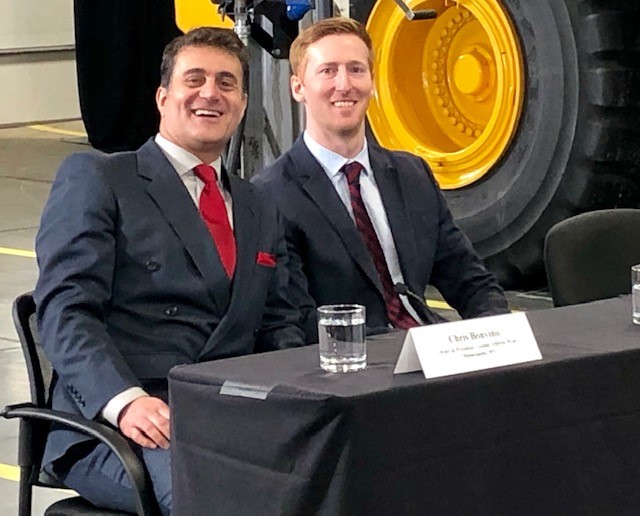 President Trump came to Burnsville on April 15 to hear how the Tax Cuts and Jobs Act, passed and signed in December 2017, has impacted business. A featured speaker at that roundtable was Edina business owner Chris Bonvino, pictured here with Ross Cooney, one of his staff members. You can hear his remarks by CLICKING HERE, starting at the -1:39 mark.

The roundtable was attended by over 300 legislators, Republican state party officials, supporters, and members of the media. Hosted by the Nuss Truck & Equipment Co. in their Burnsville facility, the number of attendees was limited.

Barbara Sutter, MN GOP Secretary, was struck by the personal care President Trump took to listen to each speaker and to look into the audience to gauge individual responses. “He rarely glanced at his script. He was genuine in his comments.” 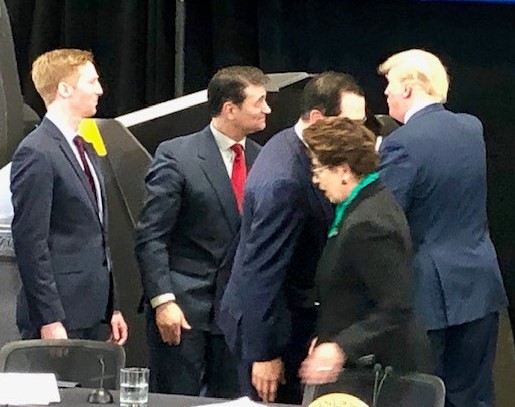 Noah Harber was able to secure a ticket due to the work that he did as a volunteer for the Republican National Committee and Senate District 49 during the 2018 campaign. “It was surreal to see [President] Trump practically in my backyard just minutes from where I live and work. The Trump team must think Minnesota is in play in 2020, which is exciting to think about how that could affect our local elections.”

A large number of supporters lined a street nearby to greet the president’s motorcade as it arrived and departed.