Several conclusions could be drawn from the precinct caucuses held in Senate District 49 on February 6. It is important at the start to recognize that a large number of volunteers took their roles seriously. They trained to do what they needed to do, and it was reflected in their execution. Our caucuses went very smoothly. 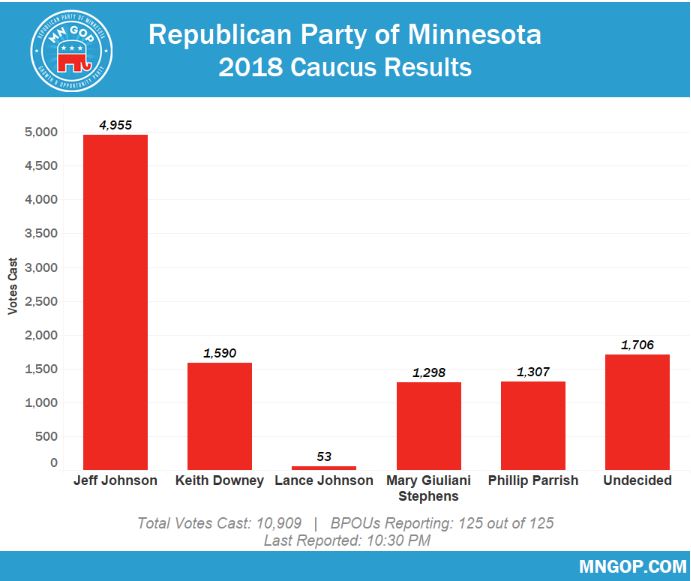 The Governor candidate straw poll did not excite the same passions as the Presidential candidate straw poll of 2016. The Republican turn-out was much less, inviting comparisons more with 2014 and the last Governor’s race. The 34 precincts of Senate District 49 attracted 336 attendees.

A special thanks goes out to the attendees who contributed during our caucuses to defray the caucus expenses. Neither the state of Minnesota nor the MN GOP cover many of the expenses involved in preparing for and conducting the caucuses. Your donations mean a lot.

Keith Downey was well-supported for Governor in his former home district, taking 43% of the straw poll voting in SD49. Jeff Johnson came in second with 32%, and Mary Giuliani Stephens polled 13%. 11% remained undecided. At the state level, Jeff Johnson garnered 46% of the votes, and Keith Downey claimed 15%.

The attendees were largely knowledgeable and supported the intent of the caucuses. There were a number of serious and thoughtful discussions. Several precincts elected at least one new officer. Almost a quarter of the attendees volunteered to continue their involvement with party efforts. The challenge for our party organization is to take full advantage of these volunteers and to maintain their excitement.

Although there were rumors that certain groups might take advantage of the expected low Republican turnout to try to take over the meetings, there was no evidence of this in our caucuses.

CLICK HERE  for a review by the Sun Current of the DFL and Republican caucuses held by precincts in the eastern portion of Bloomington.