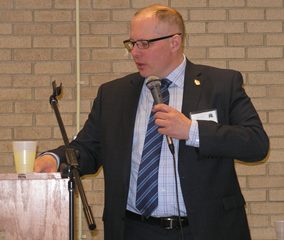 Senate District 49 Republicans listened intently February 27 as two local police officers spoke of the growing role that they and their departments are playing in responding to people in our community suffering from mental health crises. 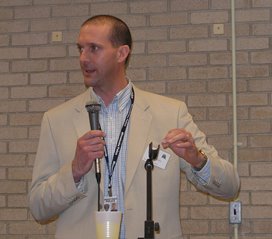 Edina Police Officer Kevin Rofidal (left) and Minnetonka Police Officer Scott Marks (right) spoke about the sharp growth in the mental health calls for service that their departments have been getting. Edina has seen such calls go from 49 in 2013 to 163 in 2016 and 154 in 2017. The trend in Minnetonka is similar, growing from 83 calls in 2005 to 391 calls in 2017, with only 6 of those resulting in an arrest.

The increase in calls is attributed to:
• people more willing to request help
• child protection calls due to parent drug use/mental health
• therapists calling 911 when a patient is a threat to self or others (handled as a medical emergency for hospitalization rather than an arrest).
• Perhaps, in part, the nonstop TV news, with 24 hours repetition of bad events.

The 1963 Community Mental Health Act was intended to base treatment in more community-oriented settings rather than inpatient / institutionalized care. Laws to protect civil rights were strengthened and 90% of psychiatric hospital beds were eliminated. But people ended up in jails instead. Currently 1/3 to 1/2 of all MN inmates are on medication for mental health.

The shortage of needed medical care continues – with waits of 6 month or more for psychiatric screenings for longer-term hospital commitment. Even minimal “72 hour health and welfare transfer hold” beds in hospitals are in short supply. A mental health patient can wait in Emergency Room chairs for more than a day, and then be released due to lack of a bed.

Police officer training in recognizing and dealing with mental health issues is available but it is expensive, both in terms of costs and time away from normal police duties. About a third of Edina’s officers have taken the 40-hour C.I.T. (Crisis Intervention Training) course, and Minnetonka has 6 trained officers now with 5 scheduled to train, plus some 1-day classes for all officers. There’s also been a push to incorporate C.I.T. training into degree programs. However, the full course is perceived as most effective after officers have some experience.

There’s currently a House finance bill for the Dakota County Sheriff to build a C.I.T. training facility for all MN officers.

Police also cooperate and coordinate with the interagency T.A.G. – Threat Advisory Group. The key is to recognize the threat, take action, and share information.

Local schools, both public and private, have good relations with the police. They conduct periodic comprehensive plan reviews. Clearly, not everyone who uses drugs for their depression or schizophrenia is a risk for being a shooter. However, schools lack enough social workers or mental health professionals who may be able to see students in mental distress and intervene early. In MN, the Education Committee heard a funding bill to get more trained counselors in schools.

While 911 dispatchers will dispatch C.I.T. officers, if on-duty, when requested, 911 is not able to refer callers to or dispatch other helpful community resources. Hennepin County COPE (for adults) or Child Crisis are both excellent options, and the arrival of people not in police uniforms can be a better alternative when handling a mental health crisis. These also offer a Crisis After Care program, with follow-up visits or phone calls. NAMI (National Association of Mental Illness) offers families advice on navigating the maze of current laws and insurance issues to get the help they need. Some physicians mistakenly interpret HIPAA rules as blocking conversations with family members of adult mental health patients; NAMI addresses that.

Nearby, St. Paul and Roseville police have launched use of a new phone app. “Vitals” allows families to voluntarily provide information about medical, developmental (e.g., autism) or mental health illness risks. The families (not the police departments) pay for the service which is intended to help officers be more aware of factors when interacting with the individuals.