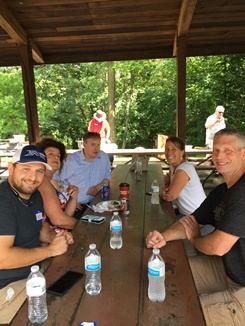 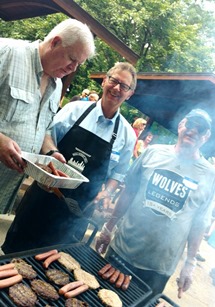 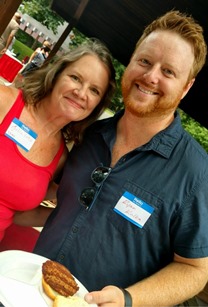 The weather was perfect, the food was delicious and the conversations were lively at Sunday's (August 4) SD49-SD50 Family Picnic. More than 80 Republicans from Edina, Bloomington, Richfield and neighboring areas enjoyed the shaded setting for the event at Bush Lake Park.

Thanks to the volunteers who organized the event, prepared the food, and made this a memorable afternoon.

Continue reading for summaries of what our guests said, and also more picnic photos. 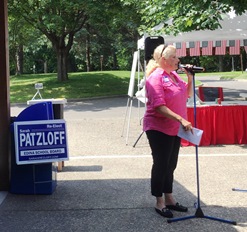 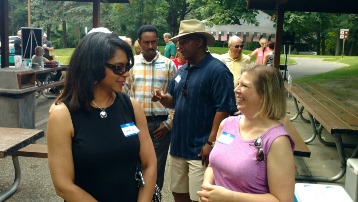 Sarah Patzloff, current member of Edina School Board, has launched her campaign for re-election. After speaking up for efforts to improve curriculum quality, she’ll need all possible support to win this fall; volunteers, yard-sign hosts, and financial support are welcomed. She has a Facebook site “Re-Elect Sarah Patzloff for School Board”. 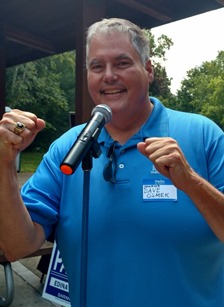 MN Senator David Osmek, (pictured at left) SD33, from Mound (our "adopted" Senator), summarized the Republican "goalie" efforts needed in the 2019 Session to stop the higher-tax and far-left-agenda proposals from the DFL-controlled House and Governor. 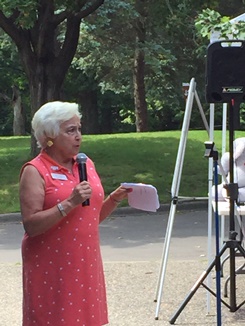 Patti Meier, (pictured at right) Chair of CD3, updated us on the staffing commitment from Republican National Committee as they focus on MN for the 2020 elections. The Field Directors for all but 1 of the Congressional Districts are already in place and CD3 will have 6 additional staff by late-fall.

MN Representative Greg Boe, (below, in red shirt) HD47B, from Chaska, spoke of the challenges faced by Republicans in the DFL-controlled house this year. He expressed his gratitude that Republicans held the majority in the Senate. While he relished the actual work and debates, a DFL-administration that said it valued “transparency” obscured the schedules of committees and bill-assignments for committee hearings making it difficult to track issues. Rep. Boe has announced he’ll run for re-election in 2020. CLICK HERE to visit his campaign website.

Rob Barrett (pictured below in purple shirt) is a candidate for US Senate. He spoke about his background (noting that it’s not perceived as “typical Republican”, as a musician and university educator, including needing to teach “Adulting 101” to college students. His motivation for running is to leave a better country / better world for the next generation. CLICK HERE to learn more at his campaign website.

Kendall Qualls  (pictured above, in hat) is a newly-announced candidate for US Congress, District 3. He spoke clearly about his reasons for running – leadership, recognizing America’s greatness, and core values – and asked for our early support. He spoke about his background in the military and business, and his family – wife Sheila and 5 children. CLICK HERE to learn more at his campaign website. 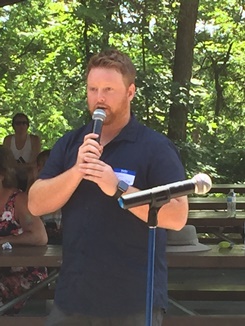 Ryan Kulka (pictured on left) is a candidate for Bloomington Mayor, and is recommended by SD49 Republicans. He’s a business owner who wants to make living in Bloomington more affordable by lowering taxes and ensuring that tax-payer money is spent wisely. He also wants to increase citizen involvement, asking for more input (or even votes) on controversial, high-cost projects. He’s facing challengers in the August 13 Primary in order to be on the Nov. 5 ballot, and asked Bloomington attendees to be sure to vote. CLICK HERE  to learn more at his campaign website. 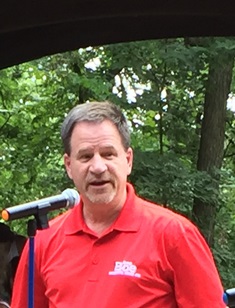 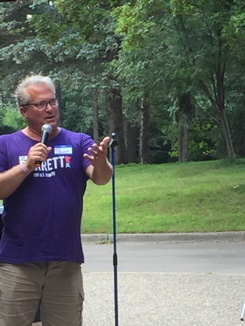 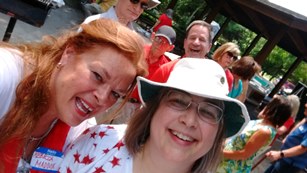 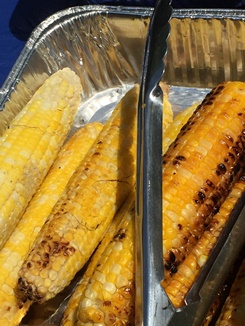 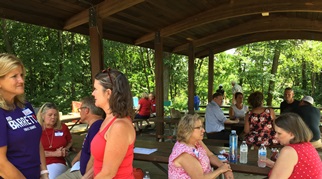