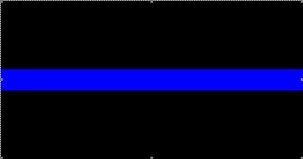 On Sunday, May 16, a flag was raised over the Bloomington City Hall in recognition of National Police Week. By Thursday afternoon, Mayor Tim Busse was issuing an apology for the show of support for the Bloomington police.

The sudden reversal was caused by protests by some community political activists.  A May 28 Star Tribune article attributed the controversy to the meaning of pro-police flags.  Some asserted that the flag’s original meaning has been co-opted by racists and insurrectionists — a version of it was carried at both the Charlottesville, Va., "Unite the Right" rally in 2017 and at the Jan. 6 attack on the Capitol.  For that reason, they say it should no longer be flown.

One activist even urged the Bloomington City Council to pass a resolution banning the flying of the flag.

The Star Tribune article did not make clear if there was any symbol the city could safely display at this time to support our police.  While some may protest, the majority of Americans continue to appreciate our police.  We see the depletion of the ranks of the police in Minneapolis while senseless violence is growing in the city, and we don’t want that to happen in Bloomington.

If you respect the role that police play in our city, please contact Mayor Busse and your city council member.  Let them know the city should stand behind the men and women who wear the uniform of the Bloomington police.  We are not racists or insurrectionists. We are community members who know that it is the “thin blue line” that keeps our communities from descending into senseless anarchy.

Tahm Loyd, a member of the Bloomington Antiracist Coalition, held a news conference to criticize the city’s decision to fly the flag.  "If your constituents are telling you and the council that the flag is racist, offensive and openly hostile, why did you even consider flying it in the first place?"  The Star Tribune reported that Loyd was joined by “community members and activists, including civil rights attorney Nekima Levy Armstrong, CAIR-MN Executive Director Jaylani Husseini and NAACP Minnesota President Angela Rose Myers.

“The City of Bloomington recognizes that the flying of the Thin Blue Line flag has caused much pain in our community," Busse’s statement read. "We apologize and will be having conversations with members of our community who have been impacted by this. We are committed to addressing our mistakes and finding opportunities where we can do better."

Levy Armstrong, who had previously worked with Busse when they were both at the University of St. Thomas School of Law, was quoted as saying that she “expects more from Busse.”  It is recalled that Levy Armstrong was charged with multiple misdemeanors for participating in a 2014 Black Lives Matter protest at the Mall of America that drew thousands of people. The charges were dismissed in 2015 by Hennepin County Chief Judge Peter Cahill, who said the protest was peaceful and not violent.

Busse, in a video posted to Facebook, said the city has raised the flag over Civic Plaza for the past three years to commemorate National Police Week.  "I don't believe for one second that there was a racist or threatening or insulting intent," he said in the video. Busse said flying the police flag was similar to the city's decision to fly the rainbow flag of the gay pride movement, something that also resulted in angry calls to his office, he said.

Myers, of the NAACP, countered that the rainbow flag is about unity, and the thin blue line flag has come to represent division.