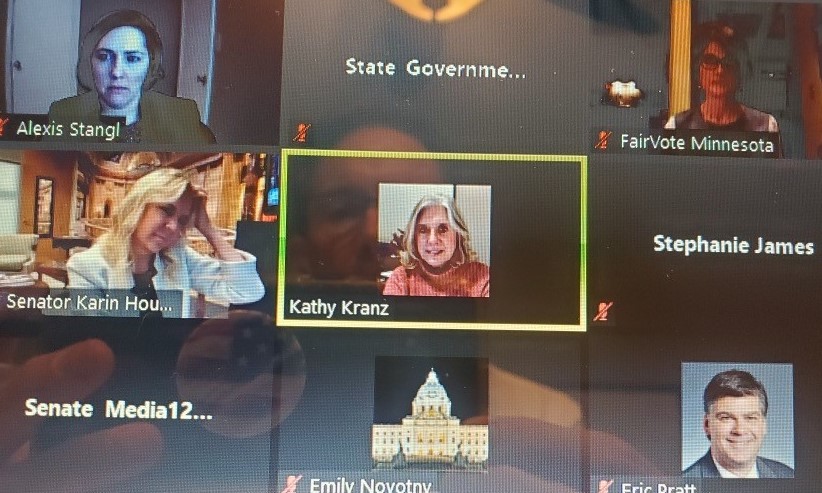 Senate District 50 Republicans Co-Chair Kathy Kranz was asked to testify on the bill. Kathy was one of the principal organizers of the opposition to the RCV ballot initiative that passed by a very small margin in Bloomington in 2020.

Kranz told the committee that last year, the Bloomington City Council was lobbied by an outside group to essentially ignore the Charter Commission’s rejection of Ranked Choice Voting. The Charter Commission, the protector of Bloomington’s city charter, was dismissed as advisory only. Concerned residents opposed to RCV were given just 90 days before the November 2020 vote to refute the unproven assertions of a large pro-RCV national foundation and billionaires. The outside proponents spent about $130,000 vs. the $6,000 spent by residents. Fairvote Minnesota provided $126,670 of that $130,000, coming mainly via Fairvote National and the John Arnold Foundation.

“It’s hard as a resident group to mount a local campaign to counter the false assertions of the local arm of a well-funded national advocacy group,” Kathy Kranz argued. As a 501 c(4), they don’t have to provide financial details on their primary donors for over three years. “Isn’t it interesting that about 97% of the money spent in Bloomington did not originate in Bloomington?”

Of 55,027 votes for president in 2020, or 91% of registered voters in Bloomington, only 49,497 voted on the RCV question, Kranz pointed out.   Over 5,500 voters did not touch the question.  RCV was passed by a mere 96 votes. Kranz noted that the vote represented barely a majority in support of RCV in Bloomington.

Kranz told the committee that Ranked Choice Voting is a voting scheme that eliminates the narrowing of choices to two top candidates.  It disproportionately disenfranchises voters, particularly the marginalized and elderly, leading to as high as 25% exhausted balloting.  Even the League of Women Voters has acknowledged that RCV allows one-issue candidates with marginal support to win with less than a majority.

“All elections should be clear, fair, transparent, inclusive, valid and trustworthy,” Kranz said in closing.  She submitted documents to back up her comments about campaign finance. She also encouraged the committee members to visit the RCVSCAM.com website for additional financing information.