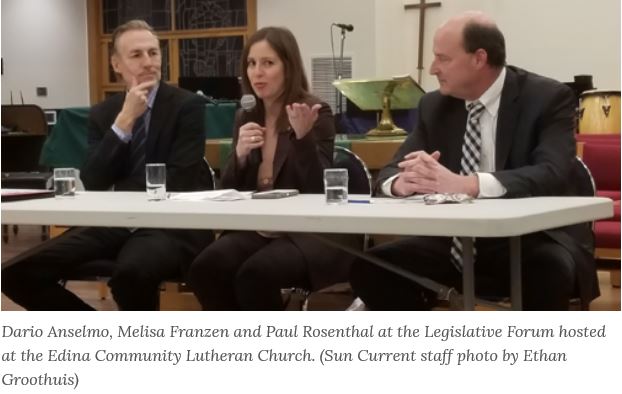 UPDATED APRIL 10 with information from the March 21 Bloomington LWV Forum.

A similar, tightly moderated forum that was publicized as a "town hall"  was held in Bloomington on Tuesday March 21, 6:30 PM, at the Civic Plaza with  Rosenthal, Sen. Melissa Wiklund (District 50), Rep. Linda Slocum, and Rep. Andrew Carlson (District 50B).

To read the Sun Current article on the Feb 21 forum, CLICK HERE

According to the Edina Sun Current, topics covered Feb. 21 included homelessness, race and equity, gun violence and health care.  All three legislators were reported to be in general agreement on most answers.

That included universal access to affordable health care, although not the method to achieve it.  Franzen felt that the rebate passed by the legislature was a band aid.  More needed to be done, but the Affordable Care Act should not be repealed.  “We shouldn’t strip it … but find ways to deal with the cost.”  Sen. Franzen supports the public option.  “We need an option that is competitive, and in [some parts of the state] some people only have one option to buy.”

Rep. Anselmo noted that several reinsurance plans were being considered by the legislature.  He said, “We can’t just take something away.  We have to make it better.”   Anselmo also spoke on the importance of mental health treatment.  “I think one quarter in prison are suffering from major mental illnesses.  Trying to make sure they don’t get in there in the first place is key.”

Updated April 10 with information from the March 21 LWV Forum

Topics covered included Real ID, the buffer bill, higher education priorities, student achievement, provisional ballots, gun control, and health care.  All four legislators were in general agreement on most answers.  Most were careful with their answers, although Rep Slocum was often blunt, if not brief, in her responses.  As an example, on Real ID, Rep. Slocum made clear that Gov Dayton would only sign a Real ID bill that enabled the granting of licenses to undocumented aliens.

On the Republican bill calling for provision ballots, the DFL legislators stated that there was no need, as there is no fraud.  Rep. Rosenthal reflected what appeared to be a common misunderstanding of provisional ballots, pointing out that he is in favor of retaining paper ballots as the state moves to electronic voting machines.

The four legislators do not support the gun bills currently being considered in St. Paul.  Rep. Rosenthal considers them the “wrong approach” and opposes them.

Regarding student achievement, Rosenthal felt that Minnesota tests too much.  “Not enough credence is given to different development paces.  Students should be in class more and tested less.”  No mention was made of underperforming schools in Minneapolis and St. Paul.  Rep. Rosenthal spoke in favor of increasing funding to universities as a means of reducing student debt.

The audience in the Bloomington City Council chambers was quiet and respectful.  No protesters attempted to unveil signs or shout down the legislators.  The forum was videotaped and is posted on the City of Bloomington’s YouTube channel.  CLICK HERE to view.