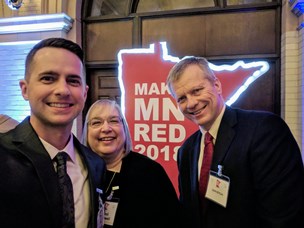 More than a two dozen Republicans from SD49 were among the crowd of almost 900 people for the April 13 Lincoln Reagan dinner / fundraiser for the MN Republican Party.

This lively gathering of people from all over the state was an opportunity to see and hear from current state & national office incumbents and also informally exchange views and news with fellow Republicans. Great music was provided by MN pianist Lori Line during dinner and by an Atlanta-based singer in the foyer before & after. Our CD3 US Representative, Erik Paulsen, spoke briefly about current topics in Congress as well as the challenges of this year’s elections in MN. CD2’s US Representative Jason Lewis served as the Master of Ceremonies for the evening. 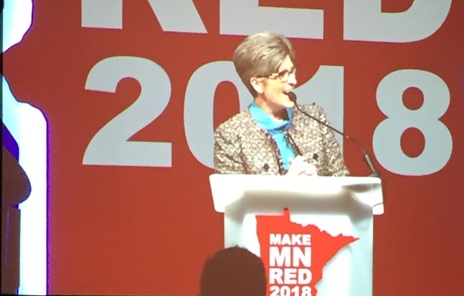 Lincoln Reagan dinner keynote speaker, Iowa’s US Senator Joni Ernst, spoke of her path to political office. Before her sophomore year of college, she gained a strong appreciation of the USA after participating in an agricultural-exchange trip to Ukraine (then part of the the Soviet Union). She decided to serve our country in the military, beginning with college ROTC. She rose to the rank of lieutenant colonel in the Iowa Army National Guard. She spent 12 months in Kuwait as the company commander of the 1168th Transportation Company during the Iraq War.

Over a ten year period, Ernst went from Auditor of Montgomery County, Iowa, to the Iowa State Senate to the US Senate. She is the first woman to represent Iowa in the US Congress and the first female combat veteran elected to the US Senate from any state.

Sen. Ernst shared her own “4 pillars”; key phrases that guide her actions.
1) Take risks. You may not always win / get the results you desired, but you will always learn. And you can only succeed if you take the risk to try.

2) Leadership is actions, not a title. Those with position-titles (Manager, Supervisor, Department Head, Chair) don’t always demonstrate Leadership. Don’t let lack of a title block you from showing leadership or taking on responsibility. One of the brightest and most influential people she works with on National Security / Intelligence issues is a young “E5” (Sergeant).

3) Service. A culture of Service - to others and to our Nation - is core to what makes America different and great.

More about Sen. Joni Ernst can be learned from her 2015 first speech on the floor of the US Senate.

The evening concluded with fundraising silent auction wrap-up, a live auction-style request for donations, and time for more conversations with friends old and new.