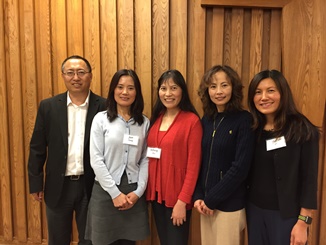 Minnesota collects data on K-12 student performance, often by broad ethnic or racial origins in compliance with Federal guidelines. In the last decade, a study funded by the federal government concluded that the data should be “disaggregated”, broken into sub-populations on the assumption that resources should be focused on students of ethnic or racial groups that were under-performing.

On September 25, Chuck Li, President of the Chinese-American Alliance, (at left in photo) spoke at our dinner program. He told us why he and many other Chinese-Americans in Minnesota do not believe that ethnic identity should be the basis for setting school policies, assigning education resources, or defining student quotas.

He was joined by (L-R) Jun Yang, Sifang Wu, Sheng Zhong and Dongfeng Qi from Education Policy Observers. They described why they've transformed into activists since last year when the MN Legislature passed a bill for disaggregated reporting at a more detailed level and the Dept. of Education announced plans for pilot-implementations. They highlighted the evidence that focusing on ethnic identity avoids the real causes (30 factors in 8 categories)  of poor educational performance. They also noted the expected costs to MN Taxpayers (more than $75 million per year) and the lack of data-security / data-privacy tools and standards for school computer systems. These leave both parents and students at high potential risk for exposure of sensitive information.

These MN parents strongly believe the planned information collection risks dividing us along ethnic and racial lines and does not promote the common good. As reported in 2017, Minnesota has already proven to be really good at collecting some student data, just not the best at using it.