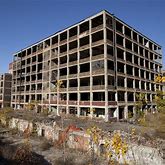 As we prepare for the 2020 elections, we should reflect again on the tragedy of Detroit’s bankruptcy (July 18, 2013). Then MN GOP Chair Keith Downey’s “Three Lessons” from that event sound a warning for MN now. As explained below, Detroit’s failure was due to 1) High Taxes, 2) One-Party Rule and 3) Corruption.

It is telling to consider whether our Minnesota DFL governor and House legislators learned anything.

From a peak of 1.8 million in 1950, the population of this once-great city was reported by The New York Times to have dropped by July 2013 to "700,000 people, as well as to tens of thousands of abandoned buildings, vacant lots and unlit streets."

Lesson 1 -- High Taxes. The most important lesson is understanding why Detroit failed. Governments receive most of their revenue from taxes. Taxes come from the local economy. A tipping point was finally reached when well-meaning liberal policies outweighed the taxpayer’s ability to pay and government leaders could not say “no” to the spending. Eventually, enough businesses and taxpayers left the core city, decimating their tax base until they could not pay for all of the things they wanted the government to fund.

The question for Minnesota policymakers is “Where is our tipping point?” Over the past six years, Republican leaders in the legislature have forced first Gov. Dayton and then Gov Walz to say “no” to some of the spending the DFL has sought in order to balance the budget without raising the taxes. We all know now how this has turned out – low unemployment, more jobs, increased funding for schools, higher consumer confidence and increased revenues to the state treasury.

With one exception. In 2013, when the DFL had a majority in the House and Senate, nobody in state government said “no.”

Lesson 2 -- One-Party Rule. Detroit had been run by one party (Democrats) for 60 years. What about MN? In 2013, with complete control by Democrats, just about every well-meaning liberal policy was heard and funded. They even talked about meeting a “pent up demand” for funding. Of course, taxes and fees were raised on every Minnesotan to pay for it all.

Minnesota’s biennial budget in 2012-2013 was $35.7 billion. The recent 2020-2021 biennial budget has grown to $48.3 billion, a 35% increase in eight years. Minnesota’s taxes are among the highest in the nation, and if the DFL had been in control of the Senate, we would have had a 70% increase in our gas tax. When will Minnesota reach our “tipping point”? When will businesses and taxpayers start making decisions that impact the ability of the state to pay for all of the feel-good, sound-good policies of Tim Walz and the Democrat-controlled House?

Lesson 3 – Corruption. Detroit was hit with an inordinate amount of corruption. Lawmakers abandoned average citizens by enacting policies in favor of interest groups that only helped themselves get reelected. When Detroit’s revenues declined in the last recession, the city’s leadership found itself unable to cut any of those commitments, and by 2013 Detroit essentially ran out of cash.

Detroit’s failure illustrates the damage one-party rule and bad leadership can bring to any state. It is time all Minnesotans rally behind Republicans to restore a more-balanced Minnesota legislature and avert the factors that emptied Detroit.