Spring Conversation Answers “How are We Doing, With MN Legislative Majority?” 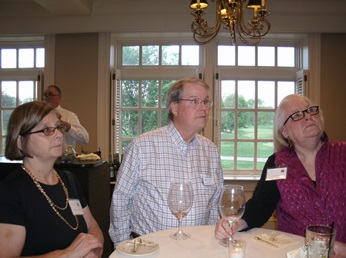 Great food in a beautiful, relaxed setting and excellent discussions with others from SD49 had all of the attendees prepared to hear from, and interact with, the panel at the Spring Conversation fundraiser May 12.

Our panel of three experts -- Kurt Zellers (former Speaker of the House), Kim Crockett (Executive Vice President, Center of the American Experiment), and David Hann (former Minority Leader of the Senate) - provided political and policy insights as they tackled the first set of key questions posed by moderator & SD49 GOP Co-Chair Randy Sutter:  We Republicans elected a majority in both houses of the Minnesota Legislature.  The session has a bit more than a week remaining.  How are we doing?  Have we accomplished enough to satisfy voters?  Will we be in a good position for the 2018 races?

The consensus was: given Democrat Governor Dayton’s negotiating style and veto promises (since fulfilled), this Legislative session’s results are likely to disappoint most voters. Voters had high expectations for changes and those won’t happen this session.  The negative effects on the next election could be less if the party does better in several areas.  These include: communicating the process barriers, setting better expectations, putting longer-term strategies in place, and celebrating the victories that were achieved.

All panelists noted Governor Dayton’s harsh, even “oddball”, negotiating style, attributed to his lack of experience in typical business win-win negotiations, and his adoption of former DFL Governor Rudy Perpich’s “tantrum” technique. Per Hann, Dayton simply doesn’t know how to negotiate – he doesn’t “get” the concept that both sides need to be happy at the end.

The vetoes are, to some extent, simply for show to satisfy the core DFL base.  Despite the messy situation set up by Dayton vetoing ALL the bills sent to him by the House & Senate, the panelists predicted that negotiations would proceed during the final week of the session, and no special session will be needed. (Editor’s note: the panelists did not know that Dayton would delay the start of negotiations, compelling the Republicans to try to rework the vetoed bills on their own.  Ultimately, a special session was needed and is being extended on May 24 as we post this.)

Dayton sincerely believes that higher taxes are the solution to fund all his ideas.  He has refused to accept or acknowledge studies that show the dire impact on private philanthropy when rising taxes result in higher-wealth individuals leaving the state.

Per Crockett, the Republican majority did their best to anticipate what Dayton would object to and remove those points from the bills; it didn’t help.  The Republicans also are “spraying money all over” to try to satisfy Dayton.  That included exceeding the automatic spending increases for education, raising the total allocation to $1.1 Billion, even though studies have shown that more money doesn’t improve education results.

Within the Legislature, Crockett noted that the big dynamic is Metro versus Outstate.  She predicted that the citizens of Hennepin County (which includes SD49) will be funding light rail.  And even though light rail won’t reduce suburban traffic congestion, it could work as a long-term DFL strategic policy to gain legislative seats in the suburbs.  The strategy:  move the poor to subsidized housing along the light-rail line and they’ll swing those districts to Democrats. 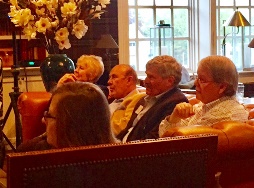 Why do Republicans always give in, and how can that change?

Can you provide an update on the Personal Care Attendants (PCA’s) union lawsuit?

What WILL be accomplished this session?

What more can the Legislature do for health insurance reforms?

Why do Republicans always give in, and how can that change?

Hann:  The Republicans simply weren’t used to being the majority.  They’ve been conditioned to give in to get anything (no matter how small) they want actually included in a bill.  How can that change?  The legislators need to find the political courage to act.  They need to pass bills that reflect GOP principles and put them on the Governor’s desk.

Zellers:  Legislators need the courage of convictions.  They need to do a much better job of explaining their position, “messaging” the issue.  Trump got elected because people understand it’s not “fair” to work every day and make about what non-working people getting welfare / public assistance are just given.

Republicans also need to continue to see and move against the decades-long strategic moves the Democrats have used to increase their funding.  For example, the expansion of schools to pre-K kids in classrooms expands the number of tax-paid teachers (unionized, which gives increased funding to Democrats from union dues).  Similarly, the Personal Care Attendants were unionized, now paying dues to SEIU which funds Democrat Party candidates.

On the horizon, the “sick tax” (2% on all billed services by medical providers) that’s been in place since 1992 will finally “sunset” in 2019.  That needs to happen, and not be delayed or reinstated.

Can you provide an update on the Personal Care Attendants (PCA’s) union lawsuit?

Crockett:  The issue of forced unionization of home-based workers is a key policy concern.

A brief background:  There were 2 unionization initiatives brought forward in most states – Child Care Workers, and Personal Care Attendants (most often family members, caring for a disabled person to permit them to remain at home).  In MN the Child Care Workers voted against being classified as state employees and unionization.  But only a small percent of Minnesota’s PCA’s turned in ballots (many PCA’s say they never got a ballot), and the union was approved in 2014.  Since then, there have been a series of efforts on several fronts to reverse that.

Today, we’re cautiously optimistic about success. A petition-drive for a rescind vote has been signed by 3-times as many PCA’s as voted in the first election.  A lawsuit was filed and heard in Ramsey county courts that the group expects to win.  And there have been hearings at the Capitol.  The funding for the SEIU union dues is deducted from the Medicaid payments to PCA’s, and totalled $4.7 Million last year in MN. Although the MN regulation required an opt-in for the union deductions, some MN PCA’s have reported that their signatures were forged.

Similar diversions of Medicaid funds intended for PCA’s to unions are happening in 12 other states. State-by-state actions to reverse those also continue.

What WILL be accomplished this session?

Hann:  Not a lot.  We do expect to direct that there be an audit of the public assistance programs to be sure only people who are eligible are using those.

We need to learn to be persistent, and patient.  We have a lot of legislators and voters from the business world who expect results within 2 years.  By their nature and training they are NOT patient.  We need to learn to think strategically and focus on the longer-term goals.  Democrats have been working 40 years to get their programs enacted.

Zellers:  The OAK Scholarship program / tax credits for private schooling is in the bill and likely to stay, although the teachers union is pulling out all the stops to oppose it. (Editor’s note: still being negotiated as of May 24- see the Legislative Updates article and our next Newsletter edition’s end of session notes.)

Tax cuts for small business are in the bill.

Education spending of $1.1 Billion is in the bill.  This is a real concern.  When you read the Northwest Ordinance that established public education funding you see that the purpose listed there for education is FAR from what education is doing now.  K -12 is now “indoctrination” in liberal ideals.  Governor Dayton wants 3 – 4 year olds in public schools (voluntary pre-K).   For kids so young, this is day-care not “school readiness” (also called ECFE or Quality Day Care).  Elementary school Principals are worried about how to handle those youngest kids, who can’t even dress themselves, in a school setting.

One key policy issue – the MN Voter Alliance provisional ballot measure – will not get in this year and maybe not next, either; it’s unlikely to be in place for the 2018 elections.

Making MN Estate taxes conform with Federal estate tax policies might get done within the next 2 years.

What more can the Legislature do for health insurance reforms?

Hann: Health insurance changes at the National level are needed to restore the ability at the state level to open the market place.  The MN Legislature’s use of tax funds for this year’s 25% reduction of individual insurance premiums (the state reimburses insurance companies for the difference) was a one-year-only deal.

Waivers that would allow the state to do what MN does well, forming and managing higher-risk pools, could come yet this year.

Crockett:  To lower premium costs, we need to help people understand that insurance is not pre-paid healthcare.  Changing the expectation to return to the view of insurance as covering major or unusual costs will be key.

In our MN state budget of $46 Billion, more than $30 Billion is for Health and Human Services.  That’s why the audit mentioned before is so important.

To close the panel, David Hann mentioned his favorite Bible verse.  Ecclesiastes 10:2 (“A wise man’s heart inclines him to the right, but a fool’s heart to the left.”)

And we may have gained a few more Republican activists from the event – some event staff who heard the panel asked us how to get involved.  A reminder of the power of communicating our views well.