State Central and State Convention to Vote on Significant Changes 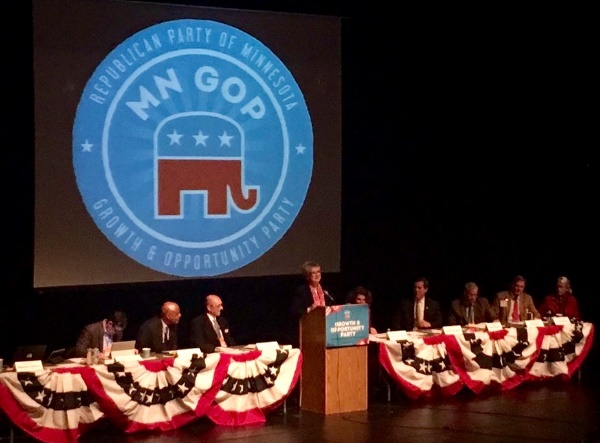 The series of Republican 2020 conventions continues this week with the meeting of the State Central Committee on Friday, May 15, and the State Convention on Saturday, May 16. Both of these meetings will be conducted by video teleconference.

Republicans will meet at the State Convention to consider endorsing a candidate for US Senate to run against incumbent Tina Smith (DFL). Jason Lewis, Rob Barrett Jr, and Forrest Hyatt are seeking that endorsement.

The State Party is also proposing some significant changes to the state party constitution and bylaws.

Changes to the state party constitution will be considered by the delegates and seated alternates at the State Convention and need only a majority of the votes to pass. Those proposed changes are:

Changes to the bylaws will be considered at the State Central Committee meeting and must be passed by a two-thirds vote. The proposed changes are:

• Eliminating mention of the Deputy Chair position and detailing the election of the Chair Pro Tempore.
• Holding State Party Officer elections in at the December State Central Committee meeting rather than at the April meeting.
• Streamlining the notification of proposals to amend the bylaws.
• Providing for the conduct of meeting and conventions by electronic means in the event of a declared Federal or State Emergency.

Delegates and alternates elected to the two state party meetings are urged to review the proposed changes ahead of time, as some of these changes are significant and open debate will be constrained by the nature of these remote meetings.

Some important Minnesota Republican party elections will also take place at these meetings.

SD49 delegates and alternates to the meeting of the State Central Committee were elected at our senate district convention in February 2019. The delegates included Russ Burnison, Joel Quinnell, Jim Bowen, and Nancy Carlson. Fifteen alternates were also selected. CLICK HERE  for a complete listing and ranking of alternates. The MN GOP sent email calls out to these individuals on Monday, May 4. Registration for this meeting closes on Tuesday, May 12 at 6 pm.

Thirty-two (32) delegates and 32 alternates were elected to attend the 2020 State Convention at our SD49 convention this year in April. CLICK HERE  for a listing of those delegates and alternates. The MN GOP sent email calls out to these individuals on Tuesday, May 5. Registration for this convention closes on Wednesday, May 13 at 10 am.