The Economics of France Ave. Trail: A Bicyclist's Viewpoint 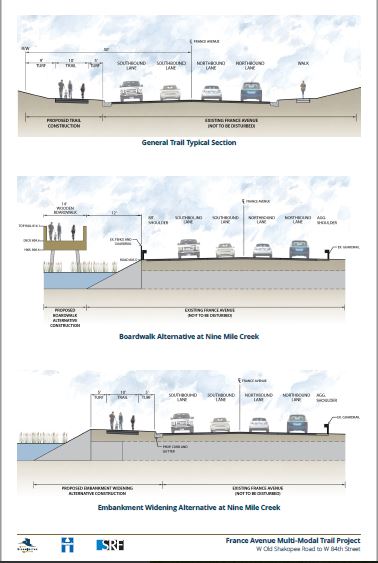 Mark Stoltz, a Bloomington resident, offers a conservative view on the economics of the France Ave. Trail. Mark enjoys biking and has been an avid cyclist in the metro area for the past 25 years

Years ago, as I was contemplating a career change, I enrolled in some prep courses for an MBA.  One class was Economics.  The professor kept asking us the essential point of economics.  Most of us responded with it's the study of supply and demand.  The professor kept asking the question over and over and with the class thoroughly stymied, he said, "Economics is ensuring that goods and services are put to their highest and best use."

Which begs the question of roadway, bike ways and the France Ave. proposal.  Are our financial and road way resources being put to their highest and best use when roads are remodeled to be bike friendly?

Here's what we know:

If we examine the proposal from a road way perspective, the four lane foot print remains.  The bike path isn't taking away lane miles like some programs do; they usually call that a road diet or traffic calming.  In Minneapolis, some of these bike lanes are causing more automobile traffic congestion and removing valuable street parking for cars.  The bike and walking path does have an existing, although much smaller, footprint.  It's been there for the past 25 years I have been biking around Bloomington.

The trail, which serves both walkers and bicyclists, does need some repair.  Also, as a gentleman attending the open house noted, portions of France Ave uses a blacktop based curbing instead of concrete and the snowplows will break chunks of it off during the winter season.

Which brings us to the proposal.  The goal is to provide more separation between motorists and pedestrians and cyclists.  The proposal would require a significant remodeling of the trail, especially when it comes to where it transits the 9 Mile Creek and Marsh area.

From a lane mile perspective, this is a costly project and has the potential of being invasive to property owners in the area.

For the Marsh area,  the board walk proposal appears to allow for a hard shoulder for that part of France Ave. which would allow vehicular emergencies and the plow ridge for snow. And with the boardwalk proposal, I would imagine there would be additional maintenance costs depending on the materials used.  An alternative to the board walk proposal is extending a berm out into the marsh area.  This removes the shoulder and looks fairly invasive to the marsh's habitat.

I was told that snow removal would be done during the winter to keep the trail clear.  Bloomington does clear sidewalks in the winter and apparently this maintenance will come from that budget.

My takeaways from the meeting varied, based on the attendees: Enthusiastic support from the cycling community.  Skepticism from home owners. Concern from taxpayers over the cost and where the funding comes from.

The open houses are a way for the city to connect with citizens and discuss these proposals and I found the city representatives to be receptive to commentary and observations as well as providing detail on the projects.

So having said all of this it comes back to the following.

Here's what we don't know:   Is there a more fiscally responsible way to ensure our resources are being put to their highest and best use?

This statement is from the city's project homepage:

Approximately three miles of trail along the corridor will be constructed to meet today’s standards for multiuse trails including additional width, improved intersection crossings, along with an improved crossing over Nine Mile Creek.

The answer I believe is in this statement. I think there should be a better explanation of what “today's standards” are.  And if they are driving up the cost of project.  Do those standards eliminate the possibility of fixing the existing trail and utilizing its footprint as it is?  Is there justification for the expense based on who is using the trail?  As a cyclist in Bloomington, I rarely bike that portion and as a motorist, it doesn't appeared to be used that much by pedestrians or cyclists. Purely from my observations of course.

When road use is evaluated, traffic can be counted and a justification can be built with data.  I believe in this case, the justification is being driven by an enthusiastic cycling community and not some more objective measure.  Are there parts of France Ave that could be updated that would benefit motorists, who would consume more of the roadway resource than a bicyclist would?  Perhaps these questions should be asked.  I would be interested in hearing the answer.