About 20-30 Trump for President supporters showed up under cool and overcast skies Thursday, October 6, to hoist banners, placards, and American flags at the pedestrian overpass of I494 near Nicollet Ave.  They gathered to exercise their free speech and bring some excitement to the Trump for President campaign in the South Metro area.

As the group grew in size, more posters and signs were proudly displayed to the afternoon rush hour commuters. Trump supporters cheered in delight as numerous semi-haulers blared their air horns, and pickup truck drivers chimed in with truck horns. Some car drivers waved, others expressed their disagreement with less polite hand gestures. 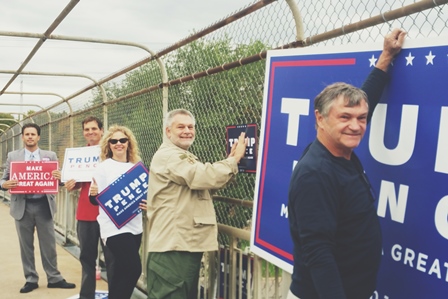 Around 4:30, about an hour into the open air demonstration, two state highway patrol cars pulled up in the parking lot of an adjacent hardware store and spoke with the event organizer, Rebecca Brannon. The state police requested removal of the large Trump signs that had been wired to the overpass grating, saying nothing could be wired to the fences.  The organizer respectfully stated the group would comply, but asked them to provide the ordinance or written rule. They were not able to do so, and also explained there had been complaints about the demonstration. They reaffirmed that the group could remain on the overpass, and the group decided to unwire and simply hold the large signs.

Then two Bloomington police cars stopped nearby, possibly to photograph the group, and then disappeared. Shortly, thereafter six police cars pulled up, some with lights flashing, and proceeded to an apartment building further down the road where a small group of renters stood outside. The police spoke to the residents for close to an hour. The same state troopers returned to the event organizer and told her the demonstrators should stay away from the people at the apartment complex, and they’d been instructed to stay away from the group on the overpass as well. He reaffirmed that the Trump supporters on the overpass were not doing anything wrong, and indicated the apartment residents were angry “because we were Republicans and they were Democrat.”

Twice during the demonstration a few kids walked through the overpass, making negative comments. One picked up a lawn sign, then left it at the stairs, as if (as the organizer put it) “testing their boundaries”.  The demonstrators had been well-briefed to never engage, just smile and say “God Bless”.

One of the Trump supporters summed it up: “It is both ironic and sad that some Americans are challenged and threatened when they voice their support for a candidate, while other Americans insist that their own rights to free speech are of greater significance.”

The group peacefully disbanded at about 6:15 PM.   If you’d like to be part of other CD3 / South Metro events in support of Trump, you may contact Rebecca Brannon .