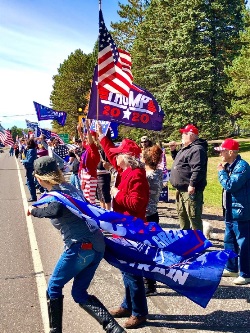 Is Minnesota’s traditionally Democratic Iron Range in play? Both presidential candidates visited Minnesota on Friday, September 18. President Trump rallied a crowd estimated to be in the thousands at the Bemidji airport, while former Vice President Biden held a much lower-key meeting with representatives of the Carpenters’ Union in Hermantown, near Duluth.

Much has been written about Trump’s appearance in Bemidji. Less has been noted about the Republican turnout for the Biden stop.

MN Republican National Committeewoman Barb Sutter was one of a few hundred happy, flag-waving Trump supporters who lined up on one side of Miller Trunk Highway in Hermantown to greet the Biden entourage as it arrived at the Carpenters’ Hall.

From her vantage point with the Trump supporters, Barb Sutter reported, “On the other side [of the highway], we faced 25 - 30 Biden supporters, some not holding back on their use of foul language, and even a sign or two reflecting the same. Very few of the many cars & trucks driving by seemed to rally to their cause, unlike the horns that honked continually for us, the thumbs-up we were getting, and the Trump flags that were being waved from within the passing vehicles.

“The contrast couldn’t have been greater... We exuded joy. Team Biden seemed filled with anger.

“We all need to get out and vote — along with our friends, neighbors, & family — and ‘Make America Great Again’! I don’t want what we faced across the street from us winning this upcoming election!”

One final telling take-away from Biden’s visit:  this 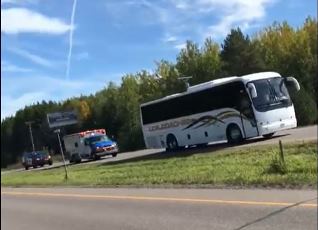 candidate for future president may tout the need to minimize crowds during his campaign stops, even banning the press during his visit to the Carpenters’ Union.

However, as can be seen in this video of the arrival of his entourage, he clearly did not distance himself from an ambulance..