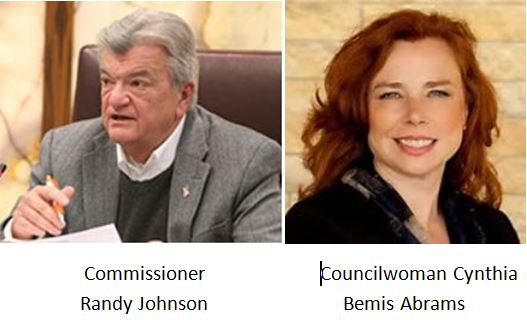 In mid-May, two prominent elected officials in Bloomington announced that they would be leaving their posts.  County Commissioner Randy Johnson announced that he will not seek re-election this year in Hennepin County District 5.  Councilmember At Large Cynthia Bemis Abrams resigned from her Bloomington City Council position effective June 4.

Read more about Johnson, Abrams, and the openings for Hennepin County Commissioner and Bloomington City Council below

First elected in 1978, Randy Johnson is the county’s longest-serving commissioner.  He represents District 5, the southernmost part of Hennepin County. It encompasses Bloomington, southern Eden Prairie and Richfield.  Johnson will officially retire when his term ends in January.

The day after Randy Johnson announced his intention to retire, Richfield Mayor Debbie Goettel declared her candidacy for the position.  Read more about Debbie Goettel on her Facebook page  https://www.facebook.com/DebbieGoettelMN

Howard, a commercial real estate broker, ran against Randy Johnson to represent District 5 in 2004.  Read more about Chris Howard at his website  http://www.chrishoward.org/aboutchris.asp

Reichert, president of a sales & marketing group, has worked with the MN Voters Alliance as a volunteer communications director and as the vice president of the governing board of his church.  Reichert is one of the five citizen petitioners seeking to put Organized Trash Collection on the ballot for the people of Bloomington to decide.  Read more about Bill Reichert on his Facebook page  https://www.facebook.com/electreichert/

Scallen Failor is the president of the Bloomington Chamber of Commerce.  Previously, she served as Vice President of Government Relations and Vice President of Administration & Customer Relations for Meet Minneapolis, a marketing organization promoting Minneapolis.  She has been a member of the Board of Directors of Cornerstone and is currently on the VEAP Board of Directors.  Read more about Maureen Scallen Failor on her Linked In page

Moller served as CFO for Christopher & Banks before retiring in 2008. Previously, Moller had worked with B Dalton/Barnes & Noble bookstores and with Arthur Anderson and Company in accounting and auditing.  He is a member of the Arbor Day Foundation.  Click here for a link to Moller's website when he ran for Eden Prairie City Council in 2014.

Prinkkila is the Interim Chief Financial Officer of OurFamilyWizard Website in Northeast Minneapolis. He has previously held financial positions in several companies in Minneapolis-St. Paul and greater Minnesota.  He is a committee member of Ducks Unlimited and a volunteer for Habitat for Humanity and the Metropolitan Economic Development Association.  Read more about Lee Prinkkila on his Linked In page.

The filing period to run for County Commissioner closes on May 31. In 2014, the Pioneer Press reported that Commissioner Randy Johnson’s total annual pay was $104,075.

Cynthia Bemis Abrams has served on the Bloomington City Council since 2014.  She will leave office effective June 4 and move with her family to Chicago.

Residents may apply for appointment to the open seat to complete Abrams unexpired term.  To be considered for appointment, applicants must be residents of Bloomington.  Candidates must complete an affidavit and application available for download on Bloomington’s website or at the City Clerk’s Office at Bloomington Civic Plaza, 1800 W. Old Shakopee Road.

The deadline for receipt of applications at the City Clerk’s Office is Tuesday, June 21, 4:30 pm.  Councilmembers earn $12,396 annually for the part-time position