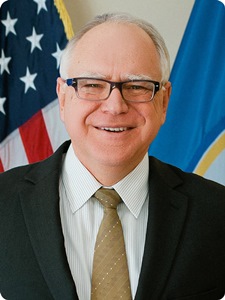 Gov Walz extended his assertion of emergency powers for a sixth month on August 12, extending it through September 11. He had earlier called the state legislature back into session, knowing that the DFL-controlled House would block any attempt to override his unilateral rule by fiat.

Instead, Walz challenged the Republicans in the senate, saying that the legislature should step up and do more. Fox News  quoted him as saying, “Every time I ask, ‘What would you do differently?’, there’s really not a response.” Rather than fully consult with the legislature, he wants his edicts to be ratified

The Democrat Speaker of the Minnesota House Melissa Hortmann told a video press conference on August 3 that Minnesota won’t be able to have an economic recovery until Governor Walz is able to "stop COVID in its tracks." So despite the significant loss of jobs, the crushing impact on businesses, and the major drop in revenue hitting our towns and cities, the Walz administration will continue its single focus on the virus infection rate.

“With the governor’s emergency powers, he decides alone whether or not schools can open, not the local districts. He alone gets to decide whether businesses are open or not “.

In mid-May, the Upper Midwest Law Center filed a motion for a restraining order against Gov Walz that compelled him to reopen churches. In June, the Center amended their Complaint. Looking for a hearing on the key legal issues, they are arguing that Walz’ arbitrary distinctions between “critical” and “non-critical” businesses and houses of worship violate the U.S. Constitution.

As reported by the Star Tribune, AG Ellison said, “We will defend it strongly in court just as we have so far successfully defended others in court.”

Ellison should not fight the suit and simply consent to the churches’ request, just as he has with the dropping of the requirements in state law for the witnessing of absentee ballots and the receipt of absentee ballots by election day. “The law compels this result.”