Walz Calls Pushback “the Cancer in our Country" 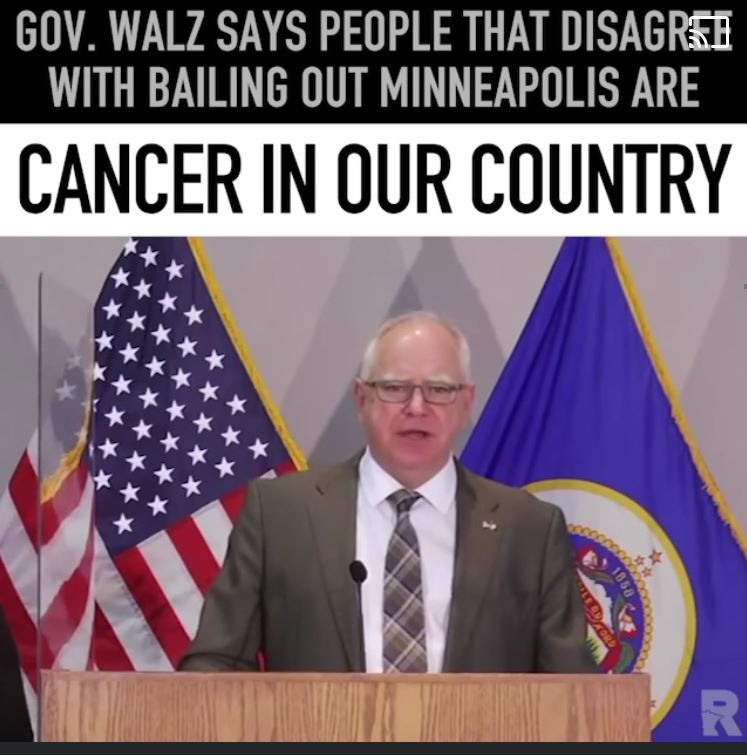 Gov. Tim Walz has included in his 2021 budget proposal a “SAFE Account,” a $35 million slush fund specifically intended for local governments should they need emergency backup in times of violent demonstrations or escalating civil unrest.

Senate Majority Leader Paul Gazelka (R-East Gull Lake) quickly came out against this set-aside. The Wadena Pioneer Journal quoted Gazelka saying, “I don’t want to give a dime to the city of Minneapolis. The city council there wants to defund the police.” A spokesperson for Senate Republicans said Minneapolis currently owes $137,000 in unpaid mutual aid agreement bills.

Legislative Republicans consider the proposal a “bailout” for a city that has understaffed its police department and should be responsible for paying for any mutual aid that they might need on their own.

Walz, the DFL governor who unilaterally imposed control over the state during the pandemic without consulting the legislature, accused Republicans of seeking to divide rural Minnesota from the metro with their rhetoric. “This is the cancer in our country,” Walz said on February 3. “This is about dividing. This is never about trying to unite together.”

Sen. Gazelka responded the next day, expressing his surprise and disappointment in the words Walz chose and saying that Walz was the one sowing division.

Minneapolis already gets Local Government Aid, or LGA. LGA is the funding allocated to local governments by the legislature every year for police and fire departments, among other local costs.

Sen. Gazelka also pointed out that the governor does have at this fingertips the National Guard and the Highway Patrol. The Governor was certainly quick to call them out when he thought that there would be an insurrection at the Minnesota Capitol on January 20.