No Tax Increase, $1B in Tax Relief 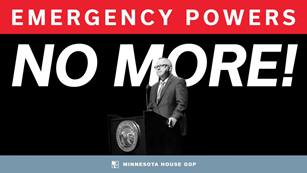 The Republican-led Senate voted first on July 29 to end Walz’s emergency powers. Senate Majority Leader Paul Gazelka (R, East Gull Lake) reported that after intense negotiations with the DFL-led House, the House were about to do the same – “against the governor’s wishes. With his hand forced, the Democratic governor announced in an 11:40 p.m. news release that he would end them himself.”

The Star Tribune reported that later that evening, the House voted to end Gov. Walz’s emergency powers as of July 1. Those powers had emerged as a key sticking point in budget negotiations. The legislature did not vote on any Chapter 12 reform, meaning the Governor still has the ability to declare another peacetime emergency should he choose to. Without changing Chapter 12, there is nothing stopping Governor Walz from following states like California and reinstating his emergency powers.

With the vote to end the governor’s current emergency powers behind them, legislators did pass a public safety bill that had been a key point of division in recent months. Democrats expressed disappointment that the public safety agreement that had been reached the prior weekend fell short on police accountability. Republicans rejected proposed DFL amendments that they said “would undermine officers’ ability to keep people safe”, including one that would impose limits on traffic stops. Stressing the value of the work done by law enforcement, Republicans felt that the amendments would send the wrong message about police.

As Gazelka put it, “It was a wild ride to get to this point. As the only state in the country with a divided legislature, people all over the country were watching Minnesota to see if an agreement could be reached.

“This is an important step in returning our government to a collaborative institution instead of one in which too much power is granted to one person. While the media is reporting the governor’s press release version of events, I want you to know what went on behind the scenes to make it happen. I’m proud of the hard work of my fellow Republicans in the Senate, and I thank all of you who have supported us in this fight.”

On the last day of the 2021 session, legislators took up the education and tax bills, which account for billions of dollars in spending and a billion in tax breaks. By the end of the day, the Minnesota House had passed all of the state budget bills and adjourned until next January.

The tax omnibus bill authorized no tax increases, fulfilling a Republican pledge and enabled by control of the MN Senate. Significant in that Democrats had started the session looking for $1 billion in tax hikes on wealthy residents and corporations. As reported by the Star Tribune, the divided legislature agreed to nearly $1 billion in tax relief over the next four years, “focusing on businesses that received federal payroll loans and workers who collected of up to $10,200 in unemployment checks during the pandemic.”

The MN Department of Revenue estimates 560,000 Minnesotans who received federal COVID-19 aid over the past year will get tax relief under the bill. By one Democratic estimate, 85% of the bill deals with COVID-19 relief and recovery – essentially limited duration spending, not new long-term programs that would drive revenue demands in future years.